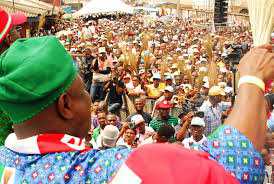 No fewer than ten vehicles were said to have been vandalised during the attack while one person was allegedly killed and five others wounded.

Two of the victims are said to be lying critically ill in a private hospital as a result of the injuries sustained during the attack.

It was gathered that supporters of the APC governorship candidate were distributing sourvenirs to residents during a neighbourhood to neighbourhood campaign rally when the PDP members who were passing by in their vehicles suddenly confronted them and started shooting sporadically.

A resident who was holding one of the APC sourvenirs was said to have been shot dead while panicky residents run for their dear life.

An impeccable source who spoke in confidence said: “The APC members had embarked on a peaceful rally to solicit support for their candidates in the coming election when they were attacked by PDP supporters who were also passing by.As a matter of fact, the PDP supporters who were heading towards Iyana Ipaja in their vehicles suddenly turned back and ran after the APC supporters.

“Before we knew what was happening, the PDP thugs opened fire on the APC campaigners leading to the death of an innocent resident while about five persons were injured; two of the victims are now in critical condition. Ten vehicles were vandalized while those injured have been taken to a hospital.”

One of Adewale’s aides, Mr Tosin Odunsi, in a telephone conversation with our correspondent, said the APC supporters actually ignited the confrontation before Adewale’s supporters retaliated.

“I was at the scene of the incident and no life was lost. We were actually returning from a campaign rally organized for our governorship candidate, Mr Jimi Agbaje, when we ran into some APC supporters at Boys Town area of Mosan Okunola and they were making a mockery of our party. My boss (Adewale) who was riding in one of the vehicles in our convoy asked us not to confront the APC supporters. However, our supporters retaliated when the APC supporters started shooting sporadically. So, our people did not attack APC members but we retaliated in self-defence. If you must know, our campaign office in Iyana Ipaja was destroyed by APC supporters about two days ago.