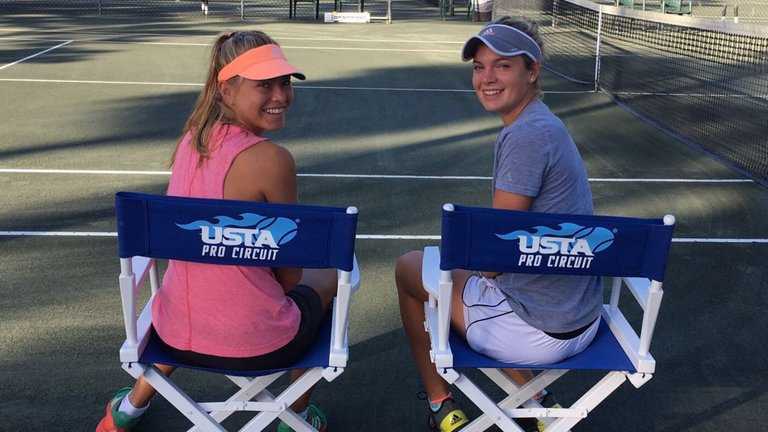 Emily Appleton’s schedule in the summer was so hectic she had to sit one of her A-Levels in Paris during the French Open.

Then it was off to the US Open in August. Another tournament in Argentina where she won her first pro title in the doubles. A Sky Sports Scholar launch in London. Back to New York. The 18-year-old from Surrey is now in South Carolina for three more ITF events.

A doubles victory in the first of those at the weekend in the $15,000 Hilton Head was her second title and the perfect start to a busy October. With French, Economics and PE A-Levels also in the bag (all A grades), all seems rosy.

Quite a baptism of fire as a new professional tennis player and Sky Sports Scholar – it’s no wonder she’s working on her fist pumps to toughen up on court.

“It’s been crazy,” Appleton said. “It was awesome winning another title in a month, especially when I only started playing the women’s circuit full-time in September.

“This will give me a higher ranking so I can get closer to my goal of being a successful tennis player!

“Over the last year I’ve been juggling full-time education and an almost full-time tennis career. In June that finally changed when I took my A-Levels. I was writing essays on planes and I even took an exam in Paris!

“It’s nice not to think about school again and focus on my tennis. My friends have even been sending me pictures of all the work I’ve been missing!

“My dad (Michael) was a pro player and he loves that I’m following in his footsteps. I saw school as an inconvenience and I just wanted to get it done and my mum and dad have always understood that. All my energies are now going into tennis.”

It’s a journey that started at the age of three and with the sporting wisdom and guidance from her parents (they both often travel with her to tournaments) she has reached a career high world junior ranking of 10 and a pro high of 695.

Holding British titles in all four age groups U12, U14, U16 and U18 is a huge plus on her CV, and for a player preferring clay, making the junior singles and doubles quarter-finals at the Australian Open and second round at Wimbledon is encouraging.

Some may think the life of a pro tennis player is spent supping exotic fruit juice and dining in five-star hotels, lounging in the sun and running around a court for an hour a day.

“Some friends do think it’s just a holiday, but there’s loads to do and it’s not just playing tennis,” Appleton added.

“Plus one of the toughest things about tennis is that there is no off-season. I usually play two matches a day, there are warm-ups for the games, you have to eat right and there are media interviews. They are really busy days.

“The pro players are more serious though. Everyone playing knows it’s their job, whereas some have just seen it as a fun ride. It’s nice though and many of my friends now have been made on the junior circuit.

“Travelling is one of my favourite parts of tennis. I get to see so many countries and play in a different place each week and meet so many great people – I think my latest count is 50 countries.

“It can be tough and it’s not the glamourous activity some people might think. You do come across some girls that aren’t very nice. I played one recently and she was horrible.

“The match was rough and she was trying her hardest to influence the umpire. You have to just deal with it though and accept it’s part of the journey. You really need a competitive side on the court to get through.

“I’ve been told I’m too nice on the court and I’m trying to change that – but not for the worst. I do get my ‘fist pump’ out or shout ‘C’MON!’ My mum encourages me to do that!”

With over three years of financial, developmental and mentoring support awaiting with Sky, Appleton is thrilled at the prospect of boosting her career.

“The Sky launch was so amazing. Having mentors will really help me and speaking to people that aren’t my family or coaches giving me an outside perspective will be amazing,” she said.

“The extra money will also allow me to travel more often with my coaches. It will help build up all of these little things to make my career progression more comfortable.

“My current ranking is 800 and I want to get that down to 500 over the next few months. I believe I can do that because I feel I’m playing at that level.

“This time next year I hope it will be 400 so I won’t yet be making the Grand Slam qualifiers, although maybe next summer I could be at Wimbledon as a wild card.

“I just want to keep setting little goals to get higher. At this level, thinking about money is a bit pointless and my ranking will take care of itself. I just need to focus on playing and winning.”

And how will she celebrate victory in her first singles tournament? “It would have to be pizza with my favourite toppings pepperoni and pineapple.”