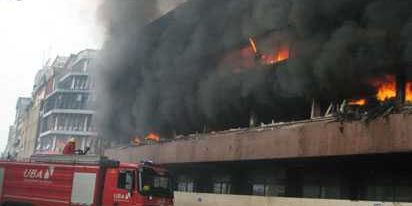 More than 200 traders occupying the building were displaced, as business activities around Oluwole Market and other adjourning streets were paralysed and property worth billions of naira destroyed in the inferno.

Hundreds of bystanders and staff of corporate organisations in the building watched helplessly as fire service men battled to put out the fire.

A senior officer of the Federal Fire Service identified as Mr. Obiah Onoh was, however, manhandled by the angry mob for the service’s alleged late response to distress calls.

Vanguard gathered that about three cars parked on the second floor of the building were also burnt by the fire, which started at 6a.m. on the first floor and spread to the third floor of the over 30-year-old building.

Officials of the Federal and LagosState fire services, National Emergency Manage-ment Agency, NEMA, their LagosState counterpart, LASEMA, and other emergency management agencies were still battling the fire at 3:30p.m., nine hours after the outbreak.

It was further learnt that the fire was made worse by inflammable goods stocked in the building, especially air conditioners, rubber foot wear among others.

Mr. Olawale Ajayi, a trader, said: “I operate a shop here, and my shop is on the third floor. I was already here about few minutes before 6a.m.

“Suddenly, we heard sounds of footsteps, an indication that people were running. They started screaming to alert us of the fire on the first floor.

“I cannot say what caused the fire. All I can say is that five minutes after PHCN restored power, we saw a thick smoke.

“Before we could do anything, the entire first floor of the building was already engulfed.”

Speaking to Vanguard, Mr. Kingsley Ogochukwu, a trader, said: “I sell footwear in this building. I received the call at about 7a.m. All my goods have been burnt.

“I have a shop on the third floor, while my warehouse is on the 10th floor. I re-stocked last week in anticipation of Yuletide season sales.

“I have lost N2.5 million worth of goods and N20,000 cash. This excludes the goods I sold to some of the traders on the first floor, which they have not paid for.

“I don’t know how to describe this because we have over 200 traders on the affected floors and none of us have goods less than a million.

“For instance, my friend also lost over N15 million because his warehouse and shop were on the first and third floors, respectively.”

Mr. Daniel Ebhefu, one of the traders on the first floor, said: “I have lost all my investments.

“All I can say is that the country’s fire fighters aren’t effective. There is need to improve. If not for the assistance from a commercial bank and a construction firm, they couldn’t have contained the fire.

“I was at home when I received the call that my shop has been affected. When I got here, the fire was still at the first floor, where it started.

“They have not been able to put off the fire and it has extended to the second and third floors.”

Mr. Babatunde Jimoh, an eyewitness, said: “I was one of the early persons to arrive. We entered the building at about 9a.m. to remove some of the cars parked on the second floor.

“After we had succeeded in removing five cars, we couldn’t withstand the thick black smoke.

“We decided to leave. As we approached the first floor, the smoke increased. While I was able to escape unhurt through the entrance, my friends Yusuf Adeshina and Mueez could not go through the fire.

NEMA Information Officer, Mr. Ibrahim Farinloye, said: “The mob attacked Obiah at 10a.m., while he was trying to put out the fire.

“I don’t know why they attacked him because at that time he was busy removing some fire-fighting equipment from the truck. He has been taken to the hospital for treatment.”

Mr. Ganiyu Olayiwola, Operational Commander, Federal Fire Service, who spoke with Vanguard, said the cause of the inferno could not be immediately ascertained.

He added that there would be an investigation into the cause of the fire and the damage done to the property.