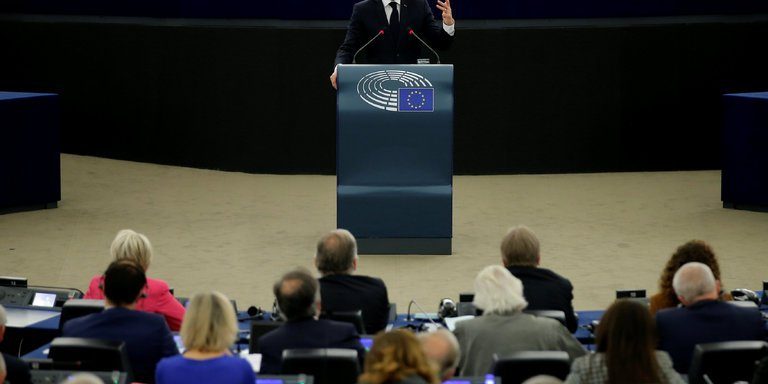 BRUSSELS — Emmanuel Macron, who beat back the far-right National Front to win the French presidency, said on Tuesday that there was “an increasing fascination with illiberalism” in Europe and that divisions over values within the European Union were like “a European civil war.”

Speaking after the re-election this month in Hungary of Viktor Orban, the professed champion of “illiberal democracy,” and moves against the judiciary in Poland, Mr. Macron said that Europe was in a battle between the liberal democracy that shaped its postwar vision and a new populist authoritarianism that brushes aside dissents and cares little about the rule of law.

Europeans must turn away from “selfish nationalism,” he told the European Parliament in Strasbourg, France. That was especially so in a world of larger and more powerful nations like Russia, China and a more disengaged United States under President Trump.

Less than a year into his presidency, Mr. Macron is still trying to make his mark both at home, where he is facing union unrest and strikes, and in Europe. He used the speech to further stake out a position as a leading champion of the European Union at a time when states are clamoring for more sovereignty and populist forces have risen to weaken even his core partner, Chancellor Angela Merkel of Germany.

His ambitious plans for reforms to the European Union and the eurozone have been confronted with German hesitation and new anxieties over the stability of Italy, which is still to form a government after elections that favored populist parties. But Mr. Macron was clearly offering more Europe anyway.

“We need a sovereignty stronger than our own,” he said.

The French president also sought to remind those like himself, just 40 years old, who had no memories of World War II and few of the Cold War, that the European Union was intended to play a vital role in encouraging peace and stability.

In a clear reference to Hungary and to Poland, Mr. Macron said: “In the face of authoritarianism, the response is not authoritarian democracy but the authority of democracy.”

Both countries have moved to consolidate party authority by tightening control over state media and the courts, and both countries have vowed to protect one another from substantive efforts to punish these efforts by the European Union.

“Macron is the candidate of those who still believe in Europe,” said Christian Lequesne, a professor of European politics at the Paris Institute of Political Studies, or Sciences Po. “But his whole strategy is based on a new image at home, of a president able to reform this unreformable country, which will give him more leverage on the European level.”

For now, the jury is out, but Mr. Macron is trying to influence a conversation on Europe’s future that seems especially necessary as Britain prepares to leave the bloc and the United States appears to be disengaging. He is calling on his fellow leaders to engage in a public debate on these issues a year before elections for a new European Parliament.

It is vital, he said, “to have a democratic, critical debate on what Europe is about.” He has suggested deeper European integration, especially for those countries that use the euro, including an enhanced European budget.

But there is considerable resistance from other member states toward creating either a more tightly integrated Europe or a multitiered one that treats certain countries differently. And nationalism in Europe is on the rise, and not just in Central Europe, under pressure from migration, terrorism and globalization.

As Mr. Macron spoke, the European Commission, the European Union’s executive arm, was working with Poland to soften its planned overhaul of the judiciary and so avoid being punished with a reduction in the funds the country receives from the future European budget, which is being debated now.

Poland’s government has been sharply criticized for trying to exercise too much political control over the judiciary and limit its independence.

As Europe contemplates what to do after Brexit, the commission had good news on Tuesday for Albania and Macedonia, urging the beginning of formal accession talks to join the European Union.

Currently only Serbia and Montenegro are in such talks, with membership not likely until at least 2025 or beyond. But this announcement was a significant sign of progress for Albania, and would represent the first start of accession talks in nearly five years.

The commission notes, however, that “continued concrete and tangible results” to assure an independent judiciary “will be decisive for Albania’s further progress.”

Edi Rama, Albania’s prime minister, called it “a new chapter in our history of long efforts, struggles, defeats and results for the last three decades to reach our European dream.”

In a telephone interview from the capital, Tirana, Mr. Rama said that the process of joining now is “meticulous and difficult,” given Europe’s internal problems. But for the Western Balkans, “countries that have had not a very generous history, the European path is the only instrument to modernize and build credible states and institutions.”

Macedonia’s talks on accession to both the European Union and to NATO have been held up for years by Greece, which is still trying to force the country, a former Yugoslav republic now formally known as the Former Yugoslav Republic of Macedonia, to take a different name. Talks on the matter have been proceeding slowly but are said to be making new progress.