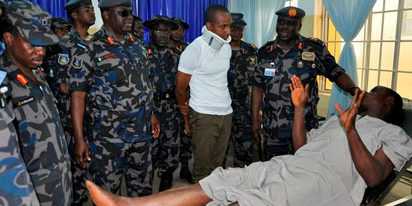 the North East and smoke out insurgents from the hideouts, the federal government has ordered the procurement of 40 modern attack helicopters with capabilities for night operations and sound proof technology.
Saturday Vanguard gathered that the attack helicopters which are being procured from the United states and Russia, would not only shore up the inventory of the Nigerian Airforce as a result of depletion following crashes and grounding of some of the existing helicopters due to maintenance challenges, but would also enhance the distance and reach capability of the NAF in the fight against insurgency.It was further gathered that some of the aircraft will arrive in the country as early as next month while the remaining will be received certainly before the end of the year to boost the Nigerian Airforce.Saturday Vanguard had reported early in the year that pilots of the Nigerian Airforce prosecuting air attacks on Boko Haram terrorists, expressed the belief that if such attack aircraft, with sound proof capabilities were made available to the NAF, the issue of smoking out Boko Haram terrorists will be a thing of the past saying that when the present ones in the fleet were approaching their targets, the noise usually gave them out.Also, military and other security forces have expressed frustration that their inability to storm the notorious Sambisa Forest where Boko Haram militants are keeping the abducted Chibok secondary school girls and also serving as operational headquarters of the group was because noisy attack helicopters would enable the terrorists use their surface to air weaponry in the possession.Government’s action in procuring the equipment according to sources is that security operatives are not only aware of the locations of the girls but are also closely monitoring the way the girls are being moved around but are afraid of the backlash should any harm befall the girls in the course of a forced rescue.The result of past incidences during attempts to rescue British and Italian nationals in Sokoto and SETRACO workers which boomerang were some of the reasons cited by security forces as to why they have been reluctant in storming the forest and rescuing the girls.Said a security source, “Oh I wish we could have a consensus of opinion from Nigerians that we should storm the forest and rescue the girls. The day Nigerians decides that enough is enough in one voice, to clear the forest will take less than one week”.