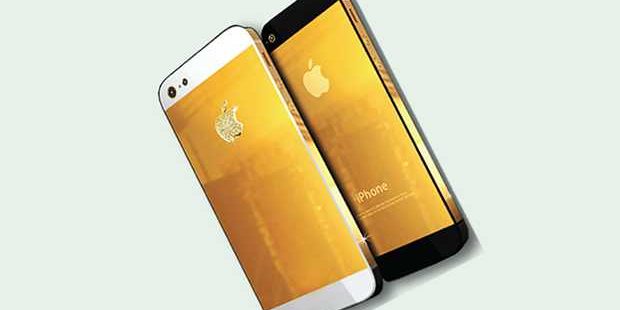 The Federal Government has ordered 53 custom made goldplated iPhones from a United Kingdom-based company, Gold and Co, to commemorate the country’s 53rd independence anniversary on October 1.

A Bristol-born businessman based in Dubai, Mr. Amjad Ali, who runs the luxury goods firm, disclosed this in an interview with The Independent of London.

He said Nigeria had joined his growing list of clients which include royal families, governments and minted customers across Russia, China and the Middle East who have ordered the gold-plated devices that cost up to £50,000 (N12.2m); meaning that the potential bill for Nigeria could be up to N649m.

According to him, basic models in gold or rose gold cost from £3,000. The iPhones ordered by the Federal Government will carry the national emblem.

“We will engrave them with the coat of arms, a shield and two horses,” he said.

The 42-year-old entrepreneur, who grew up in Glasgow, has pre-ordered hundreds of new iPhones. His team at Gold and Co. will set to work the day after launch before delivering the devices to luxury retailers.

“We strip the units down and then plate them in copper, nickel and then pure gold,” he told The Independent. “We have limited units per region and each is numbered and placed in a handmade wooden box with a certificate of authenticity and wax seal.”

Ali typically delivers 50 devices a month, including Blackberries and iPads, but orders rose to more than 300 a month when the iPhone 5 was launched last year. The firm expects greater demand still for the sixth-generation device, announced yesterday.

Gold and Co.’s customers have included the Saudi royal family, which, Ali says, ordered a gold iPhone studded with hundreds of diamonds, including a giant piece that served as the device’s “home” button. The bill: £50,000.

The company has also supplied an engraved gold iPad to each of the rooms at the luxury “six-star” Burj Al Arab hotel in Dubai.

For the new iPhone, Ali has added a platinum option to the gold and rose gold currently offered. “Muslim men are not supposed to wear gold,” he explains. “We had government departments for example cancelling orders, so now we’re launching platinum to tap into a huge market. Most importantly, it’s a third colour. Everyone wants to be different.”

The orders come at a time government is complaining of shortage of funds to pay off striking university lecturers who have refused to work for two month now due to the failure of government to pay outstanding allowances.

In a swift reaction however, the Minister of Information, Mr. Labaran Maku, denied that the Federal Government had placed such an order.

Speaking through his Chief Press Secretary, Mr. Joseph Mutah, Maku said: “We have never heard anything like that. The story is utterly false and mischievous, there is no order like that at least by this government”, he told National Mirror last night.