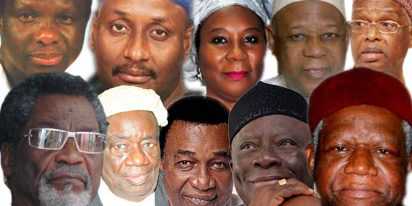 There were indications last night that the Federal Government was serious about enforcing the no-go area clauses contained in the report of the Presidential Committee on National Conference, as many of the delegates began to arrive Abuja, yesterday, for the confab inauguration today.

Vanguard learnt from competent Presidency sources that the government was working hard to ensure that the delegates did not discuss any issue that could lead to the dismembering of Nigeria.

While unfolding the details of the National Conference in Abuja, the Secretary to the Government of the Federation, Senator Anyim Pius

Anyim, listed the indivisibility and indissolubility of Nigeria as the areas that the delegates were not expected to deliberate on.
Vanguard learnt from authoritative sources that the government was bent on ensuring that the delegates kept to the issues canvassed by majority of Nigerians when the Femi Okurounmi-led Presidential Advisory Committee on National Dialogue went round the country to collate their views on what should form the issues for discussion at the conference.

It was gathered that the Federal Government through the Conference Planning Secretariat had also developed a set of rules and regulations to guide the delegates’ deliberations and to ensure that they do not go outside their brief during plenary.

One source said that it was in recognition of the need to ensure that the delegates conform to what Nigerians had already pinpointed as the main areas of interest, that each delegate would be given a set of rules and regulations upon arrival in Abuja.

“While the government would not gag the delegates on what to discuss, it is also clear that the government will not allow anything that could lead to the break-up of Nigeria.

It is important to say that the committee planning the conference had outlined the major areas of interest to Nigerians based on the views expressed by them when the committee went round the six geo-political zones of the country.

“There is no doubt that the submission of the committee will help immensely in shaping the agenda of the meeting even though the secretariat will not in any way try to gag the delegates on what to say.

“It is also pertinent to say that anyone who wants to deviate from the views of the majority of Nigerians at the conference will have to test the superiority of their argument by winning by at least 75 per cent votes,” the source explained.

Vanguard also gathered that in a bid to ensure the success of the exercise, the secretariat might adopt a modified version of the Votes and Proceedings of the National Assembly for its work.

Although the delegates were expected to arrive for accreditation today, Vanguard observed that no fewer than 20 delegates had already been screened by hordes of security agents manning the expansive compound of the National Judicial Institute, NJI, the venue of the talks.

Each of the screened delegates was issued with tags with machine-readable security features and biometrics of the delegates.