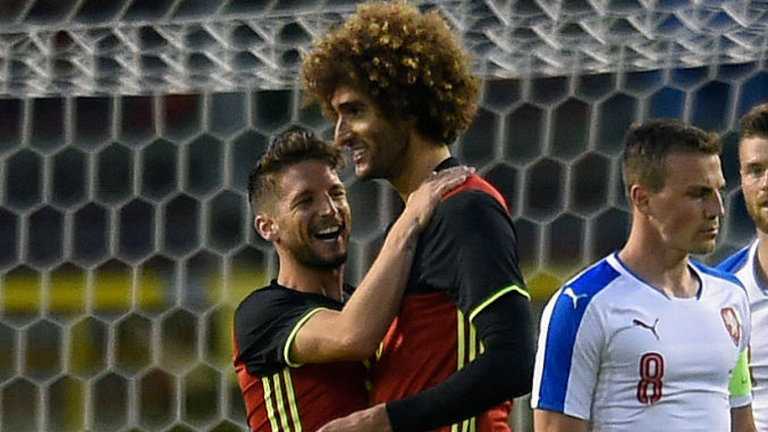 Marouane Fellaini scored the winner as Belgium saw off Czech Republic 2-1 in a friendly in Brussels on Monday night.

Eleven Premier League players featured for Roberto Martinez’s side at the King Baudouin Stadium, with Chelsea Michy Batshuayi opening the scoring after 25 minutes.

Belgium were soon pegged back by Michal Krmencik, but Manchester United’s Fellaini struck after the break to seal a victory ahead of their World Cup qualifier in Estonia on Friday.

Batshuayi struggled for game time at Chelsea during their Premier League-winning campaign, but did end the season in good form as he netted four times in as many games – including the goal that sealed the title at West Brom – and he continued that run with a calm effort from just inside the box after being teed up by strike partner Romelu Lukaku.

The Czechs were level just five minutes later, though, as Kevin De Bruyne, deep in Belgian territory, allowed Krmencik in to score.

Martinez made several changes at the break as Dries Mertens, Thomas Vermaelen, Kevin Mirallas, Christian Benteke and Fellaini were all introduced, and it was the latter who restored Belgium’s lead with a header from a Mertens corner in the 52nd minute.

Belgium currently sit top of Group H in World Cup qualifying after 13 points from their first five games, but with Greece and Bosnia & Herzegovina not too far behind, they’ll need a victory in Tallinn in Friday to ensure they stay there.