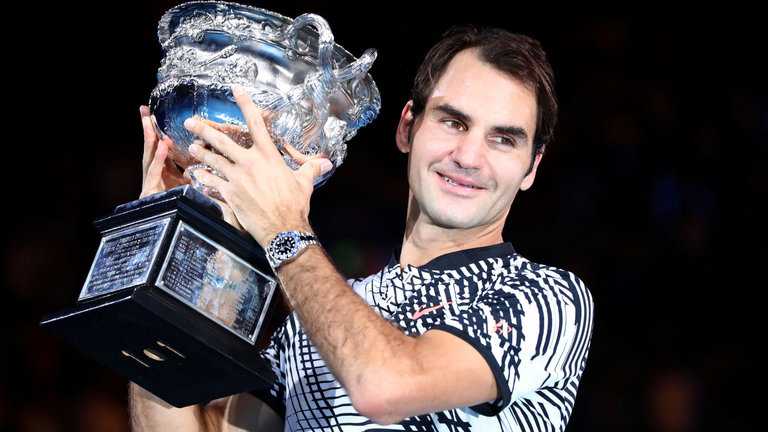 With his idol Rod Laver watching on and handing over the trophy, the 35-year-old produced a gutsy and at times magnificent performance to claim his first major title since Wimbledon in 2012 and beat Nadal in a Grand Slam for the first time since 2007.

For good measure, Federer also became the oldest Grand Slam champion since Ken Rosewall won the 1972 Australian Open aged 37, prevailing in a 3hrs and 37mins classic to secure his first Aussie crown since 2010 with all five titles coming against different opponents.

A third set Federer masterclass looked to have swung the match in his favour but showing all the tenacity that has underlined his own 14 slam titles, Nadal refused to be intimidated and fought back to force the decider and break early in the fifth.

But it was Federer, putting six months of knee and back injury problems behind him, who emerged triumphant for only the third time from the nine Grand Slam finals the duo have shared, edging an epic fifth set that reached the heights of their classic showdowns of the past.

And he was quick to pay tribute to his opponent in the post-match ceremony: “I would also like to congratulate Rafa on an amazing comeback.

“I don’t think we would have ever thought of being here in the final with you five months on. Tennis is a tough sport, there are no draws, but if there was going to be one, I would have have been happy to accept it and share it with Rafa.

Early exits for Andy Murray and Novak Djokovic had opened the door for two of the sport’s finest to roll back the years and eight years after their only previous Melbourne final, the pair did battle again.

Nadal got the better of that 2009 match in five sets for his only previous Australian Open title and having twice been a runner-up, he set out with a determination to reclaim the trophy.

Despite his near five-hour epic against Grigor Dimitrov, the day after Federer’s own five-set battle with Stan Wawrinka, it was Nadal who looked the more comfortable as the pair took their first steps into a rivalry renewed.

While Federer was relatively untroubled on his own serve, a couple of love-service holds from Nadal underlined how well the Spaniard has been serving before the Swiss legend moved through the gears.

Having secured a first love service game, Federer moved onto the front foot to force the first two break points of the match which he secured when Nadal’s backhand flew wide.

Underlining his confidence, Federer consolidated his break with a couple of magnificent winners and when needing to hold for the set, he produced a near-perfect game that included another couple of aces with form reminiscent of his 2004-07 pomp when he won 11 of 16 Grand Slam titles.

Having been so untroubled in the first set, Federer’s serve came under threat in the opening game as Nadal bent the match to his will and forced his first couple of break points, which he duly took at the second time of asking.

Nadal fended off Federer’s two chances of an immediate break back to lead 3-0 and took an iron grip of the set with a second successive break to move 4-0 in front. Federer struck back straight away but Nadal managed see out the remainder of the set in routine fashion to level the contest.

An epic first game of the third set ended with Federer clinging onto his serve despite three break point opportunities for Nadal, all of which were saved by Federer aces.

As is often the case, Federer broke in the very next game to seize the initiative and then consolidate with a near perfect service game that included three more aces.

Upping the ante, Federer piled the pressure on the Spaniard with his full arsenal of shots on display, Nadal saving them all before the Swiss managed another hold to love to lead 4-1 before more spectacular tennis gave him a double break.

Federer eventually sealed the set, but only after staving off a couple of break points from Nadal who ultimately had no answer to a set of dazzling tennis from his opponent.

Leading 2-1 in the fourth set, Nadal conjured up three break points and he struck on the second of them to edge in front and then consolidate in the next game – a breathtaking cross-court forehand winner drawing applause from the crowd as well as Federer.

Having previously been untouchable on his serve, Federer had a battle to hold on, but hold on he did, forcing Nadal to serve out the set and take the match to its dramatic conclusion.

Like his semi-final win over Wawrinka, Federer headed off the court for a medical time-out but the break seemed to invigorate Nadal who again broke in the first game of the decider.

Federer looked to hit back immediately, forcing two break-back points in the very next game but playing some of his best tennis of the match, Nadal fought them all off as he did in his second service game.

But the Spaniard could not live with relentless pressure from Federer, who forced countless opportunities before eventually breaking Nadal in his third service game with his sixth break point of the set to level the match.

Nadal saved three more break points at 4-3 down but a thrilling eighth game, including the longest rally of the match, finally went the way of Federer who went on to close out the match, the championship and yet another Grand Slam with a hold that was anything but routine.

With drama befitting of the occasion, Nadal forced a couple of break points only for Federer to waste his first Championship point before sealing the win with a forehand winner that was confirmed by hawkeye after Nadal’s challenge.