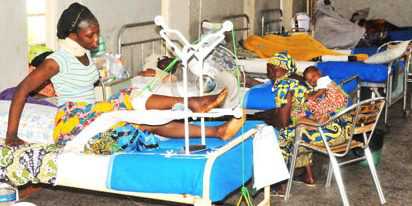 Expectation of an early end to the indefinite nationwide doctors’ strike was dashed yesterday, following failure of the Federal Government and the Nigeria Medical Association, NMA, to reach an amicable agreement, as the Senate waded into the face-off.At an emergency delegates meeting held at the instance of NMA on Monday, a holistic review of the circulars and resolutions earlier reached between it and the Federal Government did not provide any solution.

The meeting, which dragged into the early hours yesterday, had in attendance NMA delegates from the 36 states of the Federation and the Federal Capital territory, FCT, and the Federal Government negotiation team, led by the Minister of Health, Professor Onyebuchi Chukwu; Governor Emmanuel Uduaghan of Delta State; Chairman of the Senate Committee on Health, Senator Ifeanyi Okowa, and Chairman, House of Representatives Committee on Health.Giving an update of the outcome of the meeting yesterday, Chukwu, who was in Lagos for the foundation laying of the West African College of Surgeons secretariat, told Vanguard that the doctors resolved not to return to work until their outstanding demands were met.Chukwu, who stressed that government was addressing their issues, most of which he said can be addressed through the usually administrative mechanisms, said: “I am told that they have reduced it to three demands.”Worried by the ongoing doctors’ strike, the Senate yesterday said it had waded into the face-off, even as Deputy Senate President, Senator Ike Ekweremadu, appealed to the leadership of NMA to call off the strike in the interest of the people, while efforts were being made to meet their demands.Ekweremadu, who presided over plenary, said: “I would like to appeal to the striking doctors on behalf of the Senate to please consider going back to work because as long as they are on strike, the casualty will usually be the patients who are innocent of whatever agreement they had with government.”Chairman, Senate Committee on Health, Senator Ifeanyi Okowa, had drawn the attention of the Senate to the strike and that some members of his committee had held an emergency meeting with the national executive of NMA on how to resolve the dispute.Speaking to Vanguard in a telephone chat, the Chairman, Lagos State chapter of NMA, Dr. Francis Faduyile, said although government had almost met all the demands, they could not take the risk of going back to avoid a repeat of the strike in future.Meanwhile, President, Medical and Dental Consultants Association of Nigeria, MDCAN, Dr. Steven Oluwole, has warned that the restraint and caution of MDCAN should not be used to malign junior doctors to accept ‘suffering and smiling’ attitude.