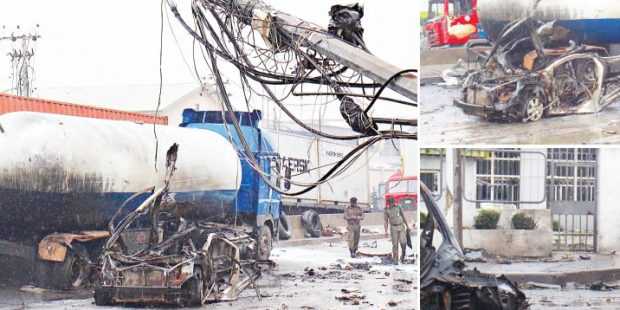 Palpable fear has gripped residents and workers at Apapa area of Lagos State, following Wednesday night’s car bomb explosion that killed about four persons and left many others injured at the Folawiyo axis of Creek Road, Apapa.
Meanwhile, security operatives have shut down business activities between Trebor Roundabout (near A.C. Christlieb) and Alex Junction on Creek Road, areas that were badly affected by the explosion.

Operatives of the Explosive Ordnance Disposal, EOD, Unit of the Nigeria Police were also at the scene at about 7a.m., carrying out post-blast investigations, while the Nigerian Navy and policemen from Area B Command cordoned off the area, preventing motorists and pedestrians from accessing the scene.

Workers that resumed for work at the early hours of yesterday were turned back by security personnel. Some workers, who spoke with Vanguard, lamented the poor state of security in the country.

‘I wonder where we’re heading’

Adaobi, a staff of the company whose building was affected by the blast, told Vanguard that she could not come to terms with the fact that insurgency is now at her doorsteps.

She said: “I cannot believe what I have seen today. I have been thinking that all these bombings and killings occurring in the northern part of the country, which I read about in the papers, will never get to the south.

“I have never thought that Boko Haram, whose aim, I think, is to create an Islamic Caliphate in the entire northern Nigeria, would ever come to the south. But what I have seen today is shocking.

“When I looked at my office building, I discovered that the glasses on the entire building were destroyed by the blast and I wondered where we are heading to.”

Another staff of a company located around the axis, who gave his identity simply as Shola, called on the security agencies to live up to expectations.

He said: “This is a shame for a government that has sworn to protect us. This has shown clearly that our security agencies are deeply confused. They are yet to come to grips with what insurgency is all about.

“With this bombing, they have shown clearly that they lack the ability to gather and analyse intelligence reports effectively, which I also think is the only way to prevent attacks such as this from happening.

“I would admit that I have not lost complete hope in our security agencies, but I would admonish them to live up to expectations because our lives are in their hands.”

Residents alarmed over presence of aliens

However, some residents of Apapa, who spoke with Vanguard, said they now live in fear following the incident, also called on the Police and other security agencies to checkmate the activities of aliens who have no business being in the area.

The residents also called on Nigeria Ports Authority, NPA, the Customs Service and the Police, to reduce increasing spate of traffic gridlocks that has made life unbearable for residents and others doing business in the area.

Charles Nwachukwu, a resident of Pay Crescent said:”Apapa in now filled with aliens; I mean, people who have no business being here and they have been operating unchallenged. I am scared terrorists may have exploited this situation to attack our area.”