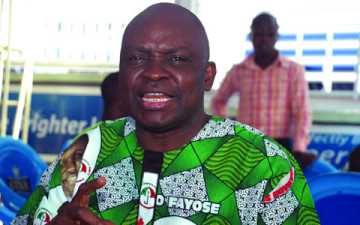 The Ekiti state Governor Ayo Fayose has lifted the dawn to dusk curfew imposed on the state in the wake of the declaration of the results of the last presidential election won by Major Gen Mohammed Buhari of the APC.

Fayose in a statement by his Chief Press Secretary Idowu Adelusi on Thursday said the curfew was lifted in the spirit of Easter
celebration and to enable Christians to celebrate Easter, which is the climax of the Lenten season.

The curfew was imposed on Tuesday sequel to the declaration of Buhari as the President-Elect by INEC, to ward off violent celebration that could trigger violence in the State.

Again, an All Progressives Congress  Senatorial Candidate  in the last Saturday’s National Assembly election, Hon Gbenga Olofin has warned Fayose and top members of his government against blackmailing him to be part of those allegedly plotting to destabilize
the State.

Olofin, who contested for Ekiti Central Senatorial District, absolved himself from being part of those that participated in the Wednesday’s victory procession to mark the emergence of Major Gen Muhammadu Buhari as the President  –elect, which ended in fiasco in the Ado Ekiti capital city.