FACES OF THOSE DEPORTED BY YORUBA’S FROM LAGOS 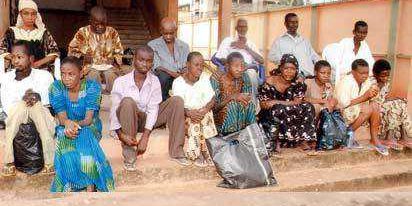 Those contemplating voting for or supporting APC in the upcoming Anambra State Governorship election must be made of the fate of those Igbos deported from Lagos by the founders of APC. These innocent hard working man and women, some of them abducted on their way back from work, illegally detained, tortured before being forcibly sent back to Igboland serve to remind all those giving support to enemies of Biafra that they are doing something they will later regret.

Ngige is now the latest in a long line of supposed distinguished Anambrarians who have ignored history and taken Igbo people into the bosom of their tormentors. Time and time again somebody from somewhere claiming to be the messiah of Igbo people always rise from this State only to bring more death upon the people in pursuit of his own selfish ambition. Everybody in Nigeria is aware that Yoruba and Hausa/Fulani Islamic extremists formed APC for the total Islamisation of Nigeria through political means. Almost all governors from the South-West geo political zone of Nigeria are Muslims. They have Rochas Okorocha in Imo State and now they want to add Anambra to their list through Chris Ngige.

This APC is the party of the ex-military Head of State Muhamadu Buhari and Bola Tinubu both fanatical Muslims. Gov. Fashola of Lagos State also a Muslim is also part of this arrangement. Gov. Rochas Okorocha who is everything you will expect in a Hausa/Fulani man is also part of them.

Why some Anambra people would even contemplate welcoming APC to Igboland given what Fashola and Buhari did and is doing to Igbo people is beyond imagination. Does it mean the people of Anambra cannot discern or understand what APC stands for?

They should better wake up because they have failed us so many times. We cannot afford to allow Anambra to be used once again as the base of the enemies of Igbo people, especially those involved in the bombing and deportation of their people.