Facebook Takes the Punches While Rest of Silicon Valley Ducks 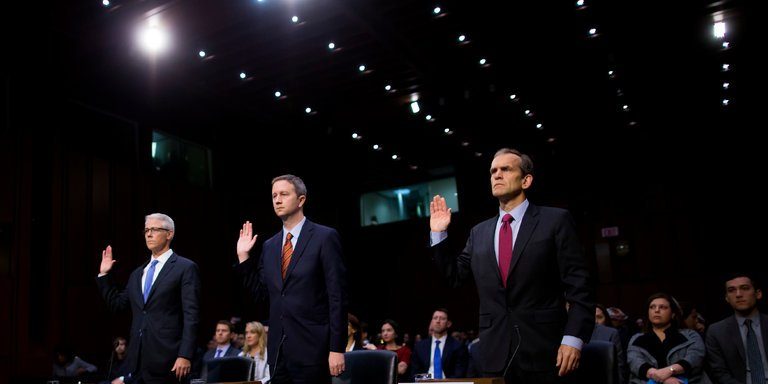 Facebook Takes the Punches While Rest of Silicon Valley Ducks

SAN FRANCISCO — Two pages of notes sitting in a binder in front of Mark Zuckerberg during his congressional testimony this week hinted at a message the Facebook chief executive rarely got a chance to deliver: We’re not the only ones.

Mr. Zuckerberg was prepared to say that his company accounts for just a slice of the $650 billion advertising market and that it has plenty of competitors. Google, for example, has an online advertising business more than twice the size of Facebook’s. And Google also collects vast amounts of information about the people who use its online services.

But as Facebook has taken it on the chin over the way it has handled the personal information of its users, the leaders of other tech companies have demonstrated that even in publicity-hungry Silicon Valley, it is entirely possible for billionaire executives and their sprawling empires to keep a low profile.

What set Mr. Zuckerberg apart? The personal information of up to 87 million Facebook users ended up in the hands of the voter-profiling firm Cambridge Analytica, which worked with the Trump campaign in the 2016 presidential election. Google and the biggest tech companies — as far as anyone knows — have never made such a giant mistake.

Mr. Zuckerberg was the only executive to testify in two days of hearings this week. Sundar Pichai, Google’s chief executive, and Jack Dorsey, Twitter’s chief executive, were also asked to testify by the Senate Judiciary Committee. But when that hearing combined with one from another committee, which hadn’t asked for Google or Twitter’s participation, Mr. Pichai and Mr. Dorsey got off the hook, said company officials and congressional aides.

For now, at least.

Before Mr. Zuckerberg testified on Tuesday, Charles E. Grassley, Republican of Iowa and chairman of the Senate Judiciary Committee, sent letters to Mr. Pichai and Mr. Dorsey with 14 questions. In his letter to Google, Mr. Grassley wanted to “understand how Google manages and monitors user privacy for the significant amounts of data which it collects.”

[2 days, 10 hours, 600 questions: Read about what happened when Mark Zuckerberg went to Washington.]

The companies have until April 25 to respond. When asked whether they were concerned about congressional or regulatory scrutiny, Google and Twitter, though company representatives, declined to comment.

“Outside of Facebook, there is probably no company paying more attention” than Google, said Jason Kint, a frequent critic of Google and Facebook and chief executive of Digital Content Next, a trade group that represents entertainment and news organizations, including The New York Times. “They’re absolutely ducking for cover while the heat is on Facebook. They don’t want to try to trip any alarms.”

Like Facebook, Google collects vast amount of data on users — including their YouTube choices, internet searches, and location history — to target advertisements. While Facebook has more than 2 billion users globally, Google has seven products, including YouTube, Gmail and its Android software, with more than a billion users each.

On Wednesday, when Representative John Shimkus, Republican of Illinois, questioned Facebook’s tracking of logged-off users, Mr. Zuckerberg was quick to point out that Google and “the rest of the industry” employed similar tactics. It was one of the few times Google’s data practices were mentioned in the two days of hearings.

Mr. Zuckerberg didn’t get a chance to say much more about Facebook’s industry peers this week. Over two days of hearings, Google was referenced 11 times by lawmakers. Twitter was mentioned 10 times and Amazon once. Apple was mentioned three times, mostly in passing.

Google employees said they have not received explicit order from management to keep a low profile because most already understand the risk. One employee, who spoke on the condition of anonymity because workers were not allowed to speak publicly on the issue, said there is an understanding inside Google that the company is the obvious next target.

In a statement, Aaron Stein, a Google spokesman, said the company is “completely focused on protecting our users’ data” and “will take action” if it finds evidence of “deceptive behavior or misuse of personal data.”

Google has been criticized — even fined — for its privacy practices over the years. It paid a $17 million fine to settle a case when it bypassed privacy settings in Apple’s Safari browser to track users and show them advertisements in 2011 and 2012. It also got dinged for scooping up people’s passwords, email and other personal information during its Street View mapping project.

Google is staying on the sidelines in other ways. Four days before Mr. Zuckerberg was set to testify, Facebook surprised many in Washington when it endorsed the Honest Ads Act, a Senate bill that would require more transparency and stricter rules for political ads on the internet. Facebook’s endorsement was a reversal from its previous opposition, said a spokeswoman for one of the bill’s co-sponsors, Mark Warner, Democrat of Virginia.

Mr. Warner and another co-sponsor, Senator Amy Klobuchar, Democrat of Minnesota, called on Twitter and Google to also back the bill. Twitter quickly responded with an endorsement. Google has not taken a public position.

Similarly, Facebook and Google had donated $200,000 each to a group opposing a California ballot initiative that proposes enabling Californians to sue companies for data breaches, among other things. Facebook this week dropped its opposition to the initiative, which organizers said is on track to appear on the November ballot in California.

Mr. Zuckerberg’s notes, which were photographed during the testimony, also contained a prepared response if lawmakers echoed criticism from Tim Cook, Apple’s chief executive, who has chided Facebook and other companies for collecting gobs of personal information about their users.

Apple has long campaigned to draw a distinction between the way it operates and Facebook and Google.

“We’re not going to traffic in your personal life. I think it’s an invasion of privacy,” Mr. Cook, Apple’s chief executive, told MSNBC. “I think everybody needs to understand Silicon Valley is not monolithic.”

After users download Apple’s most recent software update for iPhones and iPads, released on March 29, their devices prominently display a message that Apple believes “privacy is a fundamental human right.” Fred Sainz, an Apple spokesman, said the update, which has been in the works for months, is designed to better inform users on its data practices and comply with Europe’s new data-privacy rules that take effect May 25 — not taunt Facebook.

When asked if it was worried about regulations for the industry stemming from new scrutiny of Facebook, Apple referred to recent comments Mr. Cook made to MSNBC. He said he typically believes “the best regulation is no regulation” but “I think we’re beyond that here.”

Amazon, for its part, has mirrored Google’s approach, staying silent despite the frequent attacks President Trump has made against the company on Twitter. Drew Herdener, an Amazon spokesman, declined to comment.

Privacy advocates are also concerned about the tens of millions of Amazon Echo smart speakers and other voice-controlled devices that have put microphones in people’s homes.

Amazon’s top competitors for that business? Google and Apple.

“The tide has shifted,” he said. “I don’t think this is passing us by.”