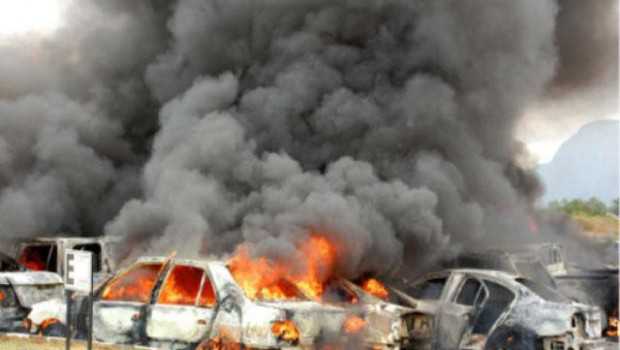 No less than eight persons were killed while many others sustained injuries in an explosion at a police checkpoint in Damaturu, the state capital of Yobe, by suspected Boko Haram terrorist bomber. Police Public Relations Officer, Yobe State Police Command, Mr. Toyin Gbadegesin, confirmed the suicide attack at a checkpoint ‎at the outskirts of Damaturu. “Eight persons were killed today in the Damaturu during a bomb incident carried out by suspected members of Boko Haram terrorist,” Gbadegesin said. The PPRO added that three police men and five suspected members of the insurgent died during the explosion, which occurred around 11am on Monday. He stated that two security personnel were currently at the Damaturu specialists’ hospital receiving treatment.

Gbadegesin explained that two cars, suspected to be carrying explosive devices, were apprehended and in the process of attempting to convey the suspects to the state police command, the suspected terrorists triggered the Improvised Explosive Devices, which killed five people on the spot while three more died later in the hospital.

The Police spokesman said men of the Explosive Ordinance Department of the state police command were deployed to defuse more IEDs discovered but had yet to explode at the scene.