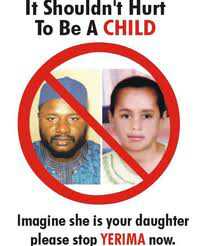 Serving senator and former governor of Zamfara State, Ahmed Sani Yerima, yesterday amplified his support for early marriage when he stated that he could give out his six-year-old daughter in marriage, if need be.

Yerima had on Tuesday successfully prevented an amendment to the second part of Section 22 of the constitution by the Senate, which dwells on affirming someone as of age once the person is married, though the person could be lower than 18 years in age.

Yerima, who came under attacks in 2011 for allegedly getting married to a 13-yearold girl, yesterday replied his critics who have been lampooning him for promoting marriage for the under-age.

He stated in an online publication yesterday that he did not deserve such criticisms, saying, ”Nigeria has many uncountable problems and none of them is early marriage. “As a matter of fact, early marriage is the solution to about half of our problems.

For those who wonder if I can give my daughter(s) out in marriage at the age of nine or three, I tell you most honestly, I can give her out at the age of six if I want to and it’s not your business.

“This is because I am a Muslim and I follow the example of the best of mankind, Muhammad (PBUH). In Islam, marriage is not only about sex, it is about family and helping one another in achieving their goals, which is the attainment of Paradise.”

Yerima added that in Islam, a girl could be given out in marriage as early as six years old, but that consummation of the marriage can only be done when the girl becomes physically mature and she gives her consent to it because unlike the English law, it is not permissible for a man to rape his wife under Shari’ah Law.

“I live in a city where young girls at the age of 12 have already become serial fornicators and cannot count the number of men they’ve had sex with.