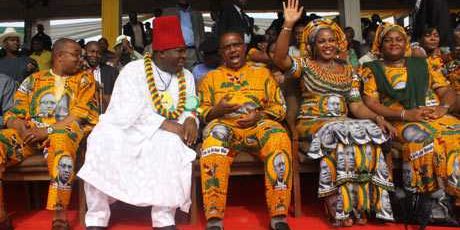 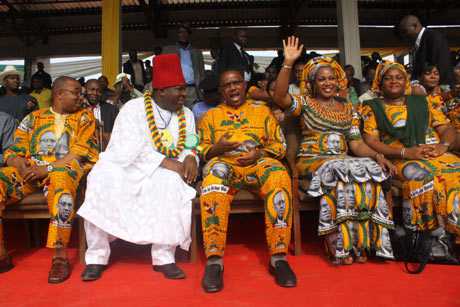 FORMER governor of Anambra State, Mr Peter Obi, has reacted to Monday’s comments by Nigerian Ambassador to Spain and wife of Dim Chukwuemeka Odumegwu-Ojukwu,  Mrs Bianca Ojukwu, following his recent defection to People’s Democratic Party, PDP,, where she expressed shock and disappointment among others, over the defection from All Progressives Grand Alliance, APGA, to PDP.

In an interview granted a national newspaper (not Vanguard) of Monday, 20thn October, 2014   by Nigerian Ambassador to Spain and wife of Dim Chukwuemeka Odumegwu- Mrs. Ojukwu,  had said, inter alia, “It is undeniable that Peter Obi made immense contributions to APGA. I remain proud of his achievements, as governor of Anambra State. His exit diminishes us, and many of his supporters and grassroots crusaders are disappointed and demoralised”.
Mrs Ojukwu also described the action of the former governor as a betrayal of her late husband and renowned Igbo leader, Dim Chukwuemeka Odumegwu Ojukwu who had such great trust in him  and his assurances that he, Obi, would always stand by APGA.
But reacting, Obi, who had so far ignored all comments made about his political decision opened up by pointing out that Bianca Ojukwu was not a frivolous person and that her comments must be taken seriously moreso, when he was the wife of his leader. .
Speaking to the newsmen, Obi said this response would be his last on the matter to enable him channel his time and energy alongside other well-meaning Igbos to work for the re-election campaign of President Goodluck Jonathan and the place of Ndigbo in the Nigerian politics.
He said Of all those who have spoken, and who continue to speak, on the issue of my leaving APGA, only Bianca spoke with sincerity. She does not fall into the class of those who are now displaying dated video clippings and presenting matters out of context for political reasons, without appreciating the sacrifice put into building the House they are now destroying.
I want to have it on record that Bianca was right when she reported my exchange with the Ikemba when he called me and asked whether I would leave APGA, after the events of Abia State at that time, when the   Governor left APGA for reasons I believe to be genuine.
“I wish to reiterate that I am still loyal to our great leader, in terms of what serves the interests of our people and the Federal Republic of Nigeria. Everyone knows today that APGA is not what it used to be. My assurance to our great leader did not imply that I would be loyal to a platform that some people have resolved to turn into an empty shell without an inner core of shared values. I remain faithful to those values and principles our great leader asked me to stand by and defend”.
Obi insists that time would reveal whether the APGA of today is still propagating the late leader’s core principles. Obi  said that he had seen enough   of violation of what APGA stood for,   and therefore   cannot continue to stay in a place which had departed from the original course and where clearly he was no wanted.