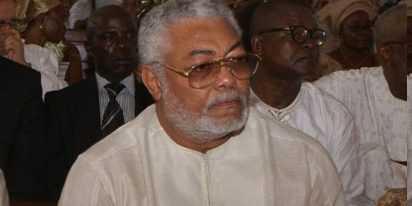 TWO former Heads of State, Gen.Ibrahim Babangida and Gen. Abdulsalami Abubakar led other Nigerian and Africa leaders to the 70th birthday celebration of the former Foreign Affairs Minister and National leader of the All Progressives Congress (APC), Chief Tom Ikimi in Igueben, Edo State, as the former Ghanaian President, Jerry Rawlings warned the Federal Government that military alone cannot stop the insurgency being perpetrated by Boko Haram.
He pleaded that as the most populous African nation,Nigeria must not allow the International community to come into its affairs due to the prevailing insecurity, asserting that the war on terror would be won if all

This comes as Governor Adams Oshiomhole who poured encomium on Chief Ikimi, urged Nigerian leaders to make sacrifices that will help the growth of the nation, saying that without sacrifices by leaders, there may be no hope for the youths of the nation.

Former President Rawlings who expressed regrets at the security situation in Nigeria, warned that the nation must resist the temptation of seeking the assistance of foreign powers in solving its problems.

According to him, “Nigeria’s political might is about 35 per cent in Africa and that is why Nigeria must show the way in leading Africa. The way the world is going, Nigeria must not suffer vulnerability or others will take advantage of the problem.

“In my country in 1979, there was no food in the market, things were very terrible. But today there is food in the market but people cannot afford it. Don’t do something that people outside will take advantage of. The situation on ground is not what the military can curb alone, it has eaten into the fabric of the society and that is why it is in a way gaining strength.

“The thing should not be left for government alone but the society must begin to examine itself, come together, strategize together, otherwise ladies and gentlemen may not be able to handle this problem today or tomorrow,” he asserted.

On his part, Governor Oshiomhole who was given a standing ovation for his developmental strides in Edo state, described Chief Ikimi as a leader who has contributed immensely to the naiton’s democracy.

“Chief made a promise in the house of God today when he said he will try to live the rest of his life as a good Catholic. And one of the things I learnt as a Catholic is that Jesus laid down his life so that the rest of us can live forever in what we believe in.

“At this point in Nigeria’s history, we need leaders who are ready to stand for the country, pay the supreme sacrifice so that our younger ones will inherit a country that is free, that offers every citizen a place for loyalty to our nation. May God use you as one of the pillars in this struggle to reposition our great nation”.

On his part, IBB described the celebrant as a “seasoned technocrat,  a hard-core politician and an eloquent speaker whose carriage invokes authority in the truest sense. To attain the age of three scores plus ten in a country where life expectancy stands at a ridiculous 47 years is a huge milestone.

”The man celebrating the milestone is not just as remarkable as the age he symbolizes. What makes that age instructively unique is uncommon wisdom, elegance, ageing gracefully, a show of quintessence, a display of finesse, with uncommon outlook,” he stated.