Even with the Graft War, Nigeria Ranked Amongst Countries With High Corruption Index – TI 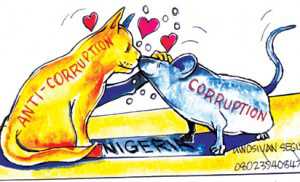 Other countries ranked along with Nigeria, according to The Independent of London report on Wednesday, are: expanding economies of Brazil, Russia, India, China, Mexico, Indonesia and Turkey.

They are however not among the 20 most corrupt as adjudged by the index, just as they are far from Denmark, New Zealand, Finland and Sweden, which scored the best in the research.

Corruption, the Independent noted comes in the forms of rigged elections, bribery, or counterfeit medicines trickling into hospitals and widespread backroom deals across the world.

The ‘most corrupt’ country in the world, according to TI is war-ravaged Sudan with a score of 8 per cent; just as North Korea and Somalia. Afghanistan follows with 12 per cent; followed by South Sudan, Iraq, Turkmenistan; Uzbekistan; Libya; and Eritrea. Making the list of top-20 most corrupt nations also are: Yemen; Venezuela; Haiti; Guinea-Bissau; Angola; Syria; Burundi; Zimbabwe; Myanmar; and Cambodia.

Afghanistan was however among the nations praised for making great improvements, rising by five points since 2013, alongside Jordan, Mali and Swaziland rising by four.

Côte d´Ivoire, Egypt, Saint Vincent and the Grenadines, also rose by five points, TI said, warning that “bribes and backroom deals don’t just steal resources from the most vulnerable – they undermine justice and economic development, and destroy public trust in government and leaders.”

United Kingdom occupied the 14th position on the list of 20 ‘least corrupt’ countries in the world, which was led by Denmark with a score of 92 per cent; followed by New Zealand’s 91 per cent. Finland was third on the list; ahead of Sweden, as well as Norway And Switzerland on the sixth position with 86 per cent score. Singapore follows on number seven; Netherlands; Luxembourg; Canada; Australia; Germany; and Iceland. Belgium and Japan jointly came 15th on the list with 76 per cent; ahead of Barbados, Hong Kong, Ireland and the United States with 74 per cent each.

The researchers flagged Australia, which has continued its slide down the list, and fallen out of the top 10 to 11, which experts blame on note-printing scandals and corruption investigations.

The UK’s ranking is regarded as disappointing by researchers, who believe it should be among the top 10.

Jose Ugaz, chairman of Transparency International, explained in an accompanying statement: “Fast-growing economies whose governments refuse to be transparent and tolerate corruption, create a culture of impunity in which corruption thrives.”

The report also noted the destabilising impact of bloody conflicts and violence, made clear in the low rankings of Sudan, Afghanistan, South Sudan and Iraq, which followed Somalia and North Korea.