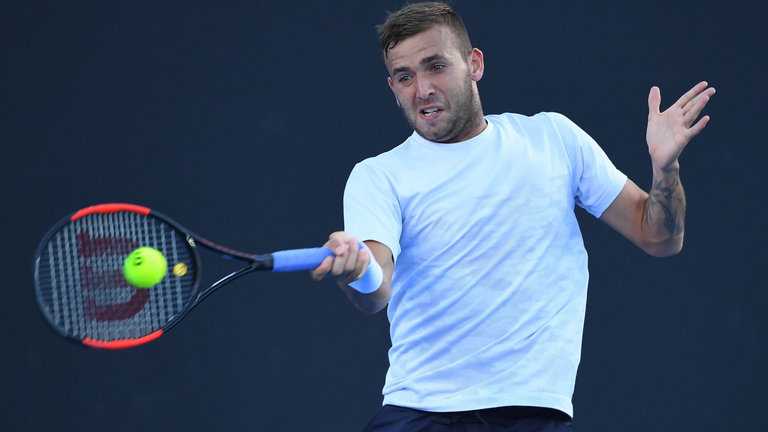 Dan Evans will take on 17-year-old Denis Shapovalov in the opening match of Britain’s Davis Cup clash against Canada this weekend.

The reigning Wimbledon junior champion will contest his first ever live rubber as he opens the tie against Evans on Friday, with the Brit also playing in his first match as his country’s No 1 in the absence of Andy Murray.

Evans has frequently been the lower-ranked wild card trying to upset the odds, but recently moved into the world’s top 50 and he knows what an exciting talent Shapovalov is having faced him at a second-tier Challenger tournament last year, winning in three sets.

“It was a good match,” Evans said of their first meeting. “He played pretty well and I won in three tight sets. It will be a good match [on Friday].

“He has quite a big game, he likes to be aggressive and dictate the play. I have to try and get on top of him rather than him being aggressive.

“In Davis Cup there’s always some upsets so I have to respect Denis and go out and give it my all.”

The rankings favour Leon Smith’s visitors this weekend, with Evans and Kyle Edmund at No 45 and No 47 respectively compared to No 234 for Shapovalov and No 133 for Vasek Pospisil.

Canada captain Martin Laurendeau drafted Peter Polansky – at No 128 the highest-ranked player available to him – into the team when Milos Raonic pulled out through injury but has stuck with Shapovalov, and Smith was not surprised at the decision.

“Denis was named in the original team, Polansky was a replacement so you’d expect Martin to go with his original pick,” Smith said. “I’ve done it before, I picked [Edmund] to play in a Davis Cup final. When they’re ready, they’re ready.”

Pospisil will meet Edmund in the second rubber on Friday while Saturday’s doubles will see Pospisil and 44-year-old Daniel Nestor take on Jamie Murray and Dom Inglot.

Shapovalov has never played a best-of-five-sets match before, while his only Davis Cup experience came with a dead-rubber win against Chile last September, but the teenager appeared unfazed by the task ahead of him.

He said: “We’ve toned down training a bit to make sure my body is ready for maybe five sets. I wanted to play the first match, kind of set the tone for the team.