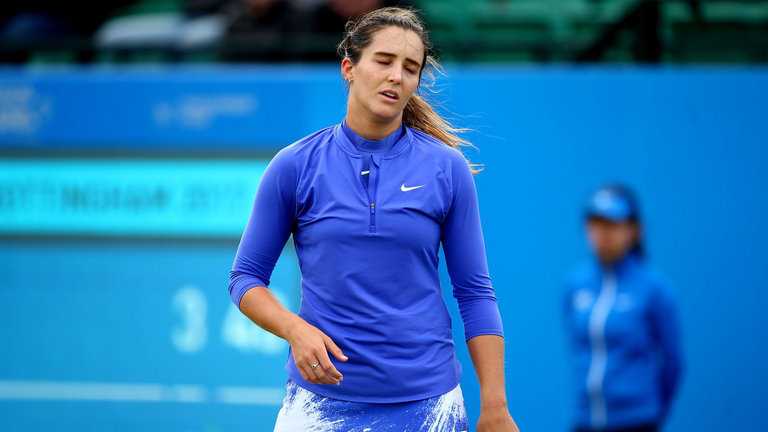 British No 3 Dan Evans is in a race against time to be fit for Queen’s and possibly Wimbledon, having pulled out of the Aegon Open in Nottingham with a calf injury.

Evans sustained the problem during a Challenger event in Surbiton last week and was seen around Nottingham Tennis Centre on crutches.

He is listed to play at Queen’s Club next week, but his participation for that is now in doubt, while Wimbledon starts in three weeks’ time.

Evans said: “I’m really disappointed to have to withdraw from the Aegon Open in Nottingham.

“The injury I picked up at Surbiton last week needs more rest before I can get back on court.

“This is my favourite time of the year, so I’m getting treatment and will do everything to be ready for Queen’s next week.

“Thanks for all the messages of support, it really means a lot.”

Laura Robson did play at Nottingham but was beaten 6-4 6-3 by the American Julia Boserup in the first round.

The 23-year-old has been playing on the ITF circuit, a level below the WTA Tour, as she continues to rebuild her career following two rounds of wrist surgery.

She has been performing well on the ITF, recently winning a tournament in Japan, but found things tougher in her first match in the main draw of a WTA tournament since the US Open.

“I am disappointed with how it went,” she said. “I had so many break-point opportunities but I just couldn’t make court on most of them.

“It never gave me a chance to get into the match.

“It is a step up in level to what I have been playing and it might take me time to adjust to a different pace of ball, different tactics.

“I had three really good weeks in Japan, I was super consistent in the most number of matches I have been for a long time.

“I have had to take a bit of time off because I had a shin problem and maybe that disrupted the way I was
feeling with the confidence.”

The grass-court season is barely six weeks long and Robson will try to qualify for tournaments in Birmingham and Eastbourne before Wimbledon.

She will have to go through qualifying or rely on a wild card to make the main draw at the All England Club next month.