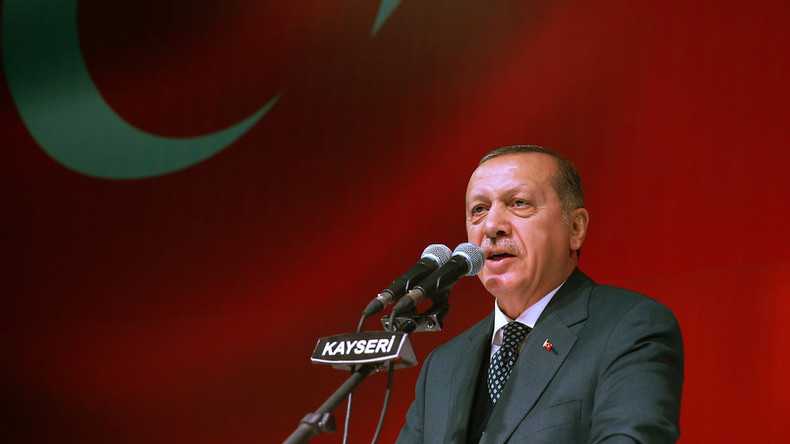 “Now, there are ones who are bothered because of us being together with our Qatari brothers or sending and exporting food supplies, drugs etc – no matter if they are in hunger or thirst – should excuse us.

We will continue to give all our support to Qatar,” Recep Tayyip Erdogan said at an iftar (fast-breaking meal) with members of his Justice and Development (AK) Party in Istanbul.

The Turkish leader has urged Saudi Arabia, as “the largest and most powerful state in the Gulf,” to reduce tensions and lift sanctions.

“It is wrong to add more troubles on top of everything in the term that the Muslim world is already struggling with a lot of problems,” he said. “I am calling you: There won’t be any winners in the brother’s fight.”

“You have to work for bringing brothers together. This is what we expect from Saudi, the Custodian of the Holy Mosques [in Mecca and Medina],” Erdogan added.

“The red line crossed by the Qatar authorities is obvious,” Noura bint Mohammed Al Kaabi, UAE’s Minister for Federal National Council Affairs, told RT Arabic. “We hope that the Qatari authorities will reconsider their politics and reconsider the reasons for the presence of radical entities on their territory that have relations to terrorist organizations in the Persian Gulf region.”

READ MORE: ‘Our demands are clear, ball is in Qatari court’: Top UAE minister to RT about Gulf rift

US President Donald Trump, who initially offered to help Qatar mediate through the crisis, also attacked Doha, accusing the monarchy of sponsoring terrorism. Doha has “historically been a funder of terrorism at a very high level… the time had come to call on Qatar to end its funding – they have to end that funding – and its extremist ideology,” Trump said Friday.

On Thursday, Qatar said that is willing and prepared to be isolated “forever” as long as foreign powers don’t interfere with its sovereignty or foreign policy.

Following the breakdown of talks, late Thursday night, Erdogan signed off on two previously ratified deals that authorizes the deployment of Turkish soldiers and military hardware to Qatar. Ankara will also train the Qatari police force.