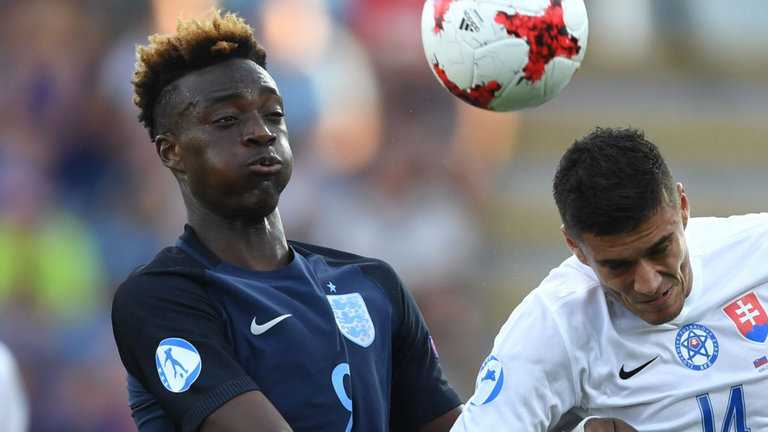 How did England’s players fare in their second match of the European Under-21 Championship against Slovakia?

Aidy Boothroyd’s side came from behind to win 2-1 on Monday and keep their hopes alive of qualifying from Group A.

He had a lot more to do than in the first game against Sweden. I think he might be disappointed with the goal but he was very decisive coming for crosses and took the pressure off his defence well.

He didn’t follow his man for the goal and I think he might have been injured when he was subbed at half-time. It wasn’t his best half.

I was a bit disappointed with some of his passing and crossing. He has got loads of energy but I thought his decision-making at times was off.

I thought he was good. He was dominant in the air, showed a lot of authority and organised well at the back.

He got the goal which was vital for England to level. I have had my doubts about him as an international player but I thought today he did really well.

There were one or two mis-hit set pieces which is unlike him, but he played a great ball across the pitch for Nathan Redmond’s goal. For that he gets a higher mark.

He was better than in the first game and saw more of the ball. He couldn’t really influence things in the final third but had a decent enough game.

It was a slightly different role for him at the base of the diamond. He takes some chances at times and gave the ball away on the edge of his own box but his passing was largely good. A bit of a mixed bag overall.

The way he led the line on his own at times was excellent and he was a real thorn in the side of both the Slovakia centre-backs. I just want to see him get a goal now but overall it was a very good display.

Better again than the first game. He changed position, got some rough treatment but kept going and made a really decisive movement for the goal.

He had a good first half and a few nice moments, including a curling shot, before he was taken off later on.

There were raised eyebrows over him coming on at half-time instead of maybe Demarai Gray. He came on at right-back and gave the team good quality up that flank and delivered the best cross that England have had so far at the tournament for the equalising goal. He might have given away a penalty with a handball but he made a good impact.

He didn’t really do a lot after coming on late in the game.