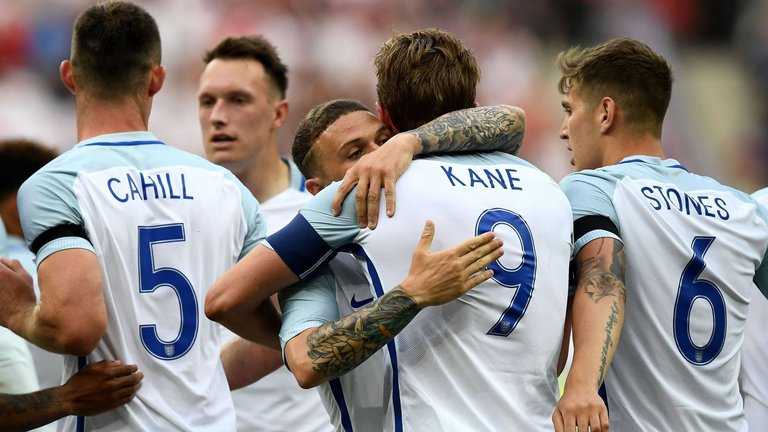 England’s season finished in defeat in Paris as Gareth Southgate’s side lost 3-2 to France.

Harry Kane scored twice, but goals from Samuel Umtiti, Djibril Sidibe and Ousmane Dembele earned victory for the hosts, despite the 48th-minute dismissal of Raphael Varane.

The Paris friendly gave several players to state their case 12 months before the start of the World Cup in Russia, but who impressed and who fluffed their lines?

To be fair, he’ll be a little bit disappointed. He made those two good saves, but he’s parried them out to the French players to score. He wasn’t mainly at fault, but the best goalkeepers would have held them or pushed them away.

He didn’t have the chance to get up and down the channel as much, but he’s a good footballer. Didn’t do too much wrong, but on tonight’s performance, he’s a seven.

The Saints man did great for the first goal, and linked up well, but we didn’t have enough possession to get the full backs forward.

He made important challenges, and defended really well throughout.

I’d love to see him do a bit more on the ball. He’s a defender playing in that three and his job is to defend, but when we play a back three I want to see three footballers.

Every now and again he ran the ball out. He didn’t run it out enough, but maybe wasn’t given the opportunity. He showed great ability, but I’m just looking for a bit more.

To be fair, his movement was good, he got into the wide positions and holes well. It was good, but it’s no more than a seven.

Just a six for Eric. He’s got to show a bit more on the ball; I didn’t see enough good football from him, lots of short passes but I wasn’t to see him change the play more in that position.

Again, only a six for me, because he kept giving the ball away. He was forcing it too much early in the game, trying to show how good a player he is, and gave it away in silly places.

He’s got good legs, and has spoiled us over the season. Tonight was probably an average game for him. I don’t think he showed the energy he usually does.

He was different class. He plays up top on his own, he can play with his back to goal, is strong and uses everything he’s got. He looks the real deal, and looks like Alan Shearer did when he was playing.

He made a couple of really good saves, and will be pleased with his performance.

He went to the right-hand side, he didn’t seem to do anything special or much wrong.

Not on the pitch long enough to award a mark.