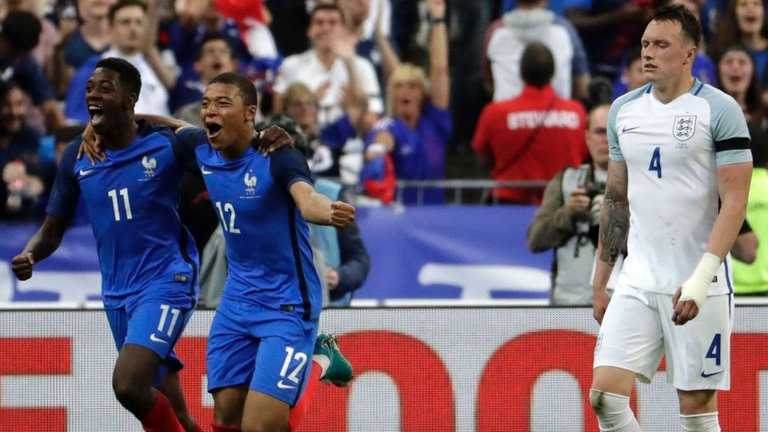 Captain Harry Kane scored twice but England were beaten 3-2 by 10-man France in a friendly in Paris on Tuesday.

England took the lead through Kane from close range (9), but France equalised 12 minutes later thanks to Samuel Umtiti’s rebounded effort.

Djibril Sidibe scored an almost identical close-range goal on 43 minutes, and Kane added his second from the spot (48) as Raphael Varane saw red for a last-man foul on Dele Alli.

Ousmane Dembele gave 10-man France the victory (78), finding the bottom corner from 15 yards as England ended the season on a sour note.

Oasis’ ‘Don’t Look Back in Anger’ was played as the teams walked out in a tribute to those who died in the Manchester and London terror attacks, while British Prime Minister Theresa May was also in the stands at the Stade de France beside French President Emmanuel Macron, and even took part in a Mexican Wave.

On the pitch, Kane’s seventh England goal came after Alex Oxlade-Chamberlain’s diagonal ball was picked up by Raheem Sterling, whose clever back-heel allowed Ryan Bertrand to centre for the Tottenham striker.

Burnley stopper Heaton then kept out Kylian Mbappe’s low effort with his feet, but again parried Dembele’s shot into the path of Sidibe inside the area three minutes before the break, allowing the Monaco man to pounce on the rebound for 2-1.

Varane was penalised for brushing the feet of Alli in the area just after the break, and was dismissed after the VAR (video assistant referee) was called in, before Kane slotted low down the middle of Hugo Lloris’ goal.

Despite being a man down, Mbappe hit the bar after a fine piece of skill in the box, before young Dortmund forward Dembele found the bottom left corner past sub goalkeeper Jack Butland from the right of the penalty area as England failed to make their numerical advantage count.

Gareth Southgate: Over the 90 minutes we saw the things that we are very good at, and with the ball we caused France a lot of problems, created chances and looked dangerous.

We scored the two goals, and then we saw the other side that we have to get better at, and that was some of our work without the ball, and our managing of the game, particularly when it went to 2-2.

I thought the three at the back worked really well, up to 2-2 I think it gave us good options on the ball, we moved the ball well and caused France problems with that.

Didier Deschamps: It is always good to finish with a victory, especially after a defeat. We were down to 10 men, so hats off to the players, because that is a great England team.

There are still some lessons to be learned. The task was made more complicated with the red, it seemed harsh. We created opportunities, and those who played showed good things.

Peter Taylor: England were punished for giving the ball away, and there’s a fair chance in these matches you’re going to get punished. I think Gareth will be looking at that, and defensively I don’t think he’ll like how the team was spread apart.

The problem with the back three is that there always seems to be holes in the full-back areas. Sometimes you have to keep adjusting, but good players are always going to test you, like France did today.

France went down to 10 men, but players like Paul Pogba and N’Golo Kante run for two people! But we’re very lucky we’ve got one of the best centre-forwards in the world at the moment in Harry Kane.

Man of the match – Harry Kane

Peter Taylor: He was different class. He plays up top on his own, he can play with his back to goal, is strong and uses everything he’s got. He looks the real deal, and looks like Alan Shearer did when he was playing.

England do not play again until September 1, away at Malta in World Cup Qualifiers, before hosting Slovakia three days later.

France host Netherlands on August 31, and then Luxembourg on September 3, also in World Cup Qualifiers.