England advance in U20 World Cup 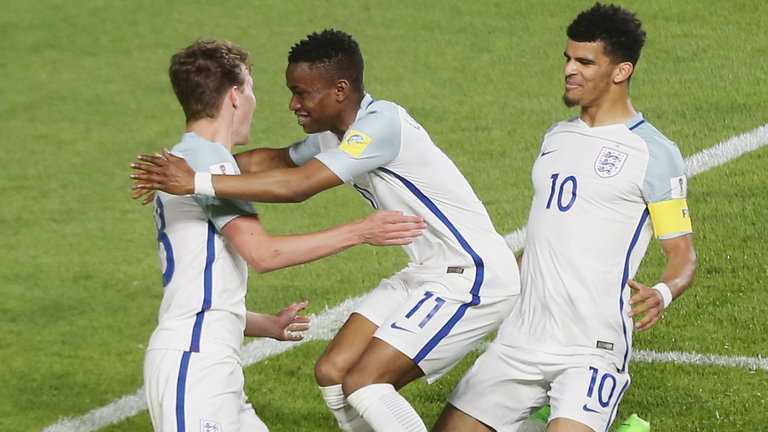 England qualified for the last 16 of the Under-20 World Cup as Group A winners after beating hosts South Korea 1-0 on Friday.

Everton’s Kieran Dowell scored the only goal of the game in the 56th minute while club team-mate Ademola Lookman hit the post twice.

The win sees England leapfrog South Korea, who had won both their previous matches, at the top of the group.

Paul Simpson’s side will now face a third-place qualifier in the last 16 in Jeonju on Wednesday, May 31.

Having beaten Argentina and drawn against Guinea, England needed just a point against South Korea to book their place in the knockout rounds.

But the hosts looked lively in the opening exchanges and Freddie Woodman had to be alert to keep out a near-post shot.

Liverpool midfielder Ovie Ejaria saw a shot deflected over at the other end before England were forced into a change when Arsenal’s Ainsley Maitland-Niles suffered an ankle injury.

He was replaced by Dominic Solanke, but England struggled to fashion any clear chances before the break.

Lookman hit the post in a bright start to the second half before Ejaria failed to finish from a good position.

England’s positive play was rewarded in the 56th minute as Everton duo Jonjoe Kenny and Dowell combined brilliantly for the opening goal. Dowell’s backheel set Kenny away down the right and he cut back for his Toffees team-mate to slide into the bottom corner.

The Video Assistant Referee was called into action for a potential stamp by Lee You-hyeon, but after nearly three minutes of deliberation decided not to take any action.

Kenny then cleared off the line for England before Lookman hit the post again with a shot from outside the box.

South Korea applied pressure in the closing stages but Jeong Taewook spurned their best chance when he shot straight at Woodman from the penalty spot.