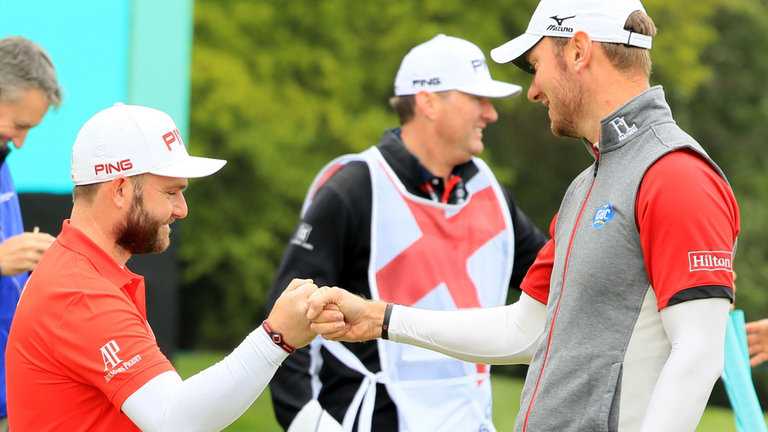 England’s Chris Wood and Andy Sullivan produced their best form when it mattered most to qualify for the quarter-finals of the inaugural GolfSixes.

The top seeds were held to draws by India and Denmark in their opening two matches at a cool and breezy Centurion Golf Club which left them needing a victory over the Netherlands to progress to the knockout stages.

But Wood and Sullivan were a combined five under par over the six holes in the greensomes format and cruised to a 4-0 win over Joost Luiten and Reinier Saxton which secured top spot in Group A by virtue of hole difference over the Danish pairing of Thorbjorn Olesen and Lucas Bjerregaard.

Scotland also made it through to the last eight as Richie Ramsay and Marc Warren finished runners-up to Thailand in Group B, but the Wales team of Jamie Donaldson and Bradley Dredge crashed out after failing to win any of their Group C matches.

The inaugural two-day competition packed full of innovation opened in a blaze of noise and fanfare as Wood and Sullivan made their way to the first tee, but the home pair were fortunate to escape with a 2-2 draw with India when SSP Chawrasia and Chikkarangappa three-putted the final green.

Wood and Sullivan then drew all six holes against Denmark, but they birdied the first three holes in a convincing win over the Netherlands which set up a quarter-final against the Italian pairing of Matteo Manassero and Renato Paratore.

Italy snatched a 2-2 draw with France in the second session when Manassero hit a stunning second to within two feet of the cup to set up a winning eagle, although they still needed to beat Sweden in their final match to qualify for the last eight.

But they managed it in dramatic style when Manassero holed a superb 20-foot birdie putt from fringe and Joakim Lagergren’s attempt from 12 feet slid past the hole.

Scotland clinched a thrilling 3-2 win over Belgium in their opening match thanks to an eagle at the last, and they also eagled the third and added three birdies to win a high-quality clash with Spain and guarantee their quarter-final place with a game to spare.

The Portugal pairing of Jose-Felipe Lima and Ricardo Gouveia followed their crushing win over Wales with an equally impressive 4-0 drubbing of Australia, who scraped through as Group C runners-up thanks to American Paul Peterson falling foul of the shot clock.

Leading 1-0 against Wales, Peterson exceeded the 40-second limit with his approach to the fourth and incurred a one-shot penalty which would prove costly as their second match ended in a 1-1 draw.

Peterson and Lipsky battled to a 1-0 win over Portugal in their final match, but they would finish two points behind Australia as Sam Brazel, Scott Hend birdied the last two holes to earn a 2-1 victory over a deflated Wales.

France, represented by last week’s Volvo China Open champion Alexander Levy and Gregory Bourdy, beat Sweden and South Africa to top Group D ahead of Italy to set up an intriguing quarter-final with Denmark on Sunday.