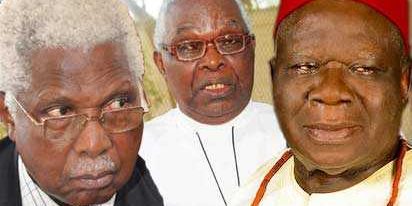 FORMER Vice President Alex Ekwueme, one time Federal Commissioner for Information and Ijaw Leader, Chief Edwin Clark, Reverend Emmanuel Gbonigi and others under the aegis, Southern Nigeria Peoples Assembly, SNPA yesterday reiterated their support for the immediate convocation of a National Conference and called for its immediate convocation by President Goodluck Jonathan.

According to a statement signed by Dr. Alex Ekwueme (South East); Chief Edwin Clark ( South South) and Rt. Rev. Emmanuel Gbonigi (South West) yesterday, the SNPA urged President Goodluck Jonathan to before December this year set up a Committee that will work out strategies and modalities for the convocation of a National conference that will give the ethnic nationalities of Nigeria the opportunity to discuss the collective future after what they termed a “forced” marriage of 100 years remains the most rewarding centenary gift President Jonathan can give to Nigerians.

The Senate President’s call that ethnic nationalities should be given the space to discuss the future of Nigeria is most germane and could not have come at a better time. We are indeed elated that the Senate President has aligned with our long held view that a conference of ethnic nationalities is imperative in correcting the enormous discontent in the Nigerian polity.

Instructively, the position of the Southern Nigeria Peoples Assembly in resolving burning national issues threatening the Corporate existence of the nation has been very clear.

“Since our inaugural conference at Ibom Golf and Resort Le Meridien, Uyo on 12th July, 2012 and the succeeding Conference a Nike Lake Hotel Resort, Enugu on the 29th January, 2013, the SNPA had affirmed its commitment to the convening of a national conference.

Our position was again reaffirmed in the communique issued at the end of the 3rd General Conference of the Southern Nigeria Peoples Assembly held on the 20th of May 2013 in Eko Hotel and Suites, Lagos.

“We therefore call on President Goodluck to set up a committee to work out strategies and modalities for the convocation of a national conference by not later than December 2013 giving the ethnic nationalities of Nigeria the opportunity to discuss their collective future after a “forced” marriage of 100 years the most rewarding centenary gift President Jonathan can give to Nigerians.”