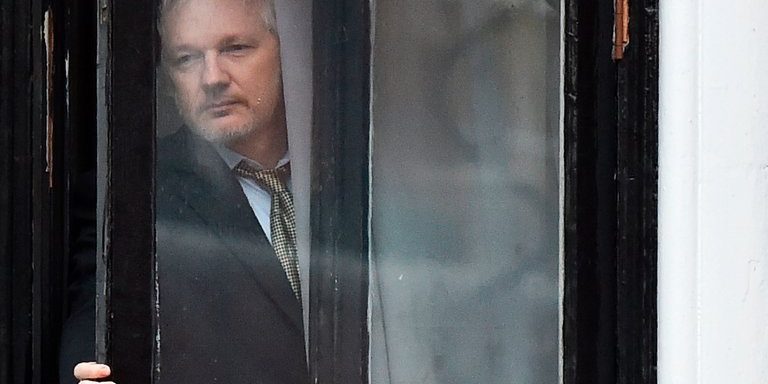 Ecuador’s government said Wednesday that it had suspended internet access for Julian Assange, the WikiLeaks founder who since 2012 has lived in Ecuador’s Embassy in London, out of concern that he was harming its relationships with Britain and other European nations.

The decision set off a furious reaction from some Assange supporters. One of them, Kim Dotcom, an online renegade who founded a file-sharing site, urged supporters to gather outside the embassy in protest. The filmmaker Oliver Stone wrote on Twitter: “Free Julian Assange! Restore his internet connection!”

Ecuador’s government granted Mr. Assange citizenship in January, the latest step in a longstanding diplomatic standoff. But it said it had suspended Mr. Assange’s online communications on Tuesday because he had imperiled “the good relations that the country maintains with the United Kingdom, with the rest of the states of the European Union, and other nations” through his social-media messages.

The government did not provide specifics, but some speculated that the decision might have been related to the Western nations’ coordinated actions against Russia after the poisoning of a former Russian spy in Britain. In a series of Twitter posts this week, Mr. Assange was critical of Western nations’ expulsions of Russian diplomats.

The agendas of WikiLeaks and Russia have dovetailed at times, whether by coincidence or intent.

In July 2016, WikiLeaks published nearly 20,000 Democratic National Committee emails that had been hacked by the Russian government, embarrassing the party’s nominee, Hillary Clinton. In November, it emerged that Donald Trump Jr. had online conversations with WikiLeaks during his father’s campaign.

Two Assange supporters — the English rock musician Brian Eno and the Greek economist Yanis Varoufakis — speculated that Ecuador was reacting to tweets in which Mr. Assange criticized the Spanish government’s detention of Catalan separatists and the recent arrest, in Germany, of the separatist leader Carles Puigdemont. They called efforts to isolate Mr. Assange “appalling.”

This was not the first time Ecuador had cut off Mr. Assange: It did so in October 2016, saying it feared being sucked into efforts to interfere in the American election.

Mr. Assange went to the embassy in 2012 to avoid extradition to Sweden to face questioning about rape allegations. Sweden dropped that inquiry last May, saying that too much time had passed.

But Mr. Assange still faces a British charge for skipping bail and, more pressingly, fears being arrested and deported to the United States. Attorney General Jeff Sessions fueled such fears last year when he said that arresting Mr. Assange was “a priority.”

Mr. Assange, a 46-year-old native of Australia, has long been an irritant for the British authorities. A junior foreign minister, Alan Duncan, told members of Parliament this week, “It’s about time that this miserable little worm walked out of the embassy and gave himself up to British justice.”

Now, the patience of his Ecuadorean hosts appears to be wearing thin as well.

Ecuador’s foreign minister, María Fernanda Espinosa, said Wednesday that officials would meet in London next week with Mr. Assange’s lawyers to explore additional measures that Ecuador might take in connection what she called Mr. Assange’s “noncompliance” with his agreement not to meddle in foreign affairs.

“We are evaluating the measures with our lawyers,” she said. “We will explore what are the alternatives that allow us the framework of international law and our own legislation and Ecuadorean Constitution.”

She added, “The most important thing is that Ecuador maintains a dialogue with the United Kingdom to find a definitive and lasting solution to this situation that the current government has inherited.”

Her remarks alluded to the distaste that Ecuador’s president, Lenín Moreno, has expressed toward Mr. Assange. Although it was Mr. Moreno’s government that gave Mr. Assange citizenship, the president appeared to have done so reluctantly, and mainly out of respect for his predecessor and ally, Rafael Correa.

A version of this article appears in print on March 29, 2018, on Page A4 of the New York edition with the headline: Ecuador Ends Web Access For Assange, Prompting Ire. Order Reprints| Today's Paper|Subscribe