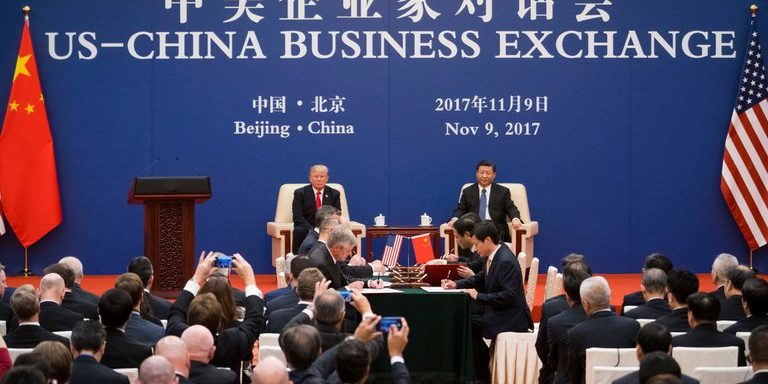 BRUSSELS — Virtually no one in Europe wants President Trump to plunge headlong into a trade war with China. But nearly everyone thinks that it is time to stand up to China’s closed markets and trade manipulation.

The European Union may not like Mr. Trump or the way he is doing things — but that does not mean it dislikes his aims when it comes to trading with China.

The way to make that happen, it believes, is challenging China through negotiations within the existing trading system, avoiding a degenerative tit-for-tat battle that could harm Europe’s relatively vibrant economy.

“When Trump was elected, a lot of Europeans wondered whether there will be a point where we have to decide between the U.S. and China, and it seems that moment may be now,” said Angela Stanzel, a China expert with the European Council on Foreign Relations in Berlin.

“I don’t think Europe will side with China — we have the same problems with China as the Americans do,” she said. “But the E.U. does agree with the Chinese that Trump is doing it the wrong way and has been outspokenly critical about his methods. A trade war between the U.S. and China would really put Europe on the spot.”

So far, Mr. Trump has evaded the usual venue for settling trade disputes — negotiating through the World Trade Organization — by citing national security as a justification for his severe tariffs on steel and aluminum imports.

Last week, Beijing struck back, threatening an additional $50 billion worth of tariffs on American products, including soybeans, cars and pork. It has asked the European Union — subject to Mr. Trump’s proposed tariffs but temporarily exempted — to take its side in the dispute.

Beijing has good reason to be concerned about Europe and the United States ganging up against it over trade.

Despite its unhappiness over Mr. Trump’s methods, Europe is unlikely to side openly with China, given the importance of the trans-Atlantic security relationship and its own arguments with Beijing.

Germany and France, in particular, have been increasingly annoyed by China’s behavior, especially its closed markets and its lack of transparency about investments in Europe.

There has also been growing recognition that China is pursuing its own great-power goals as relentlessly as Mr. Trump wants to do.

“The Chinese are very, very worried about any kind of trans-Atlantic alliance or even discussions about the rise of China, what it’s doing as an investor or geopolitically,” said Philippe Le Corre, a China expert now at Harvard’s Kennedy School of Government. “Chinese officials are always asking about this.”

Europe has become tougher in its view of China, he said, with France, Germany and Italy urging the European Union to start screening investments in sensitive industries and sectors.

China has few real allies in the world of trade, he said, and there has rarely been a better opportunity “for the world to assess the presence of a huge player who is now involved in everything, takes advantage of open markets elsewhere and doesn’t really open its own market to the West.”

Mr. Trump campaigned on an economic platform that was anti-globalization, anti-Germany and anti-China. He promised, in particular, to get tough with China to benefit American workers, promising huge and unlikely blanket tariffs and taxes on Chinese imports.

Some action was expected, and now it has come.

But there is still debate in Europe about whether Mr. Trump intends to go through with these tariffs or whether they are part of his theory of negotiation — threaten big, then call even minor concessions a victory. No one is sure.

But Ms. Stanzel and others believe that China’s leader, Xi Jinping, just granted an end to term limits on his job, does not want a trade war that unites the wealthy, technology rich West against him, however reluctantly.

“The Chinese seem willing to negotiate behind closed doors,” she said, adding that the Chinese and the Europeans were both talking to the Trump administration “about finding a better way.”

Jyrki Katainen, the European Commission’s vice president in charge of jobs, growth and competitiveness, described Mr. Trump’s methods as “unconventional.” But, he added, “there’s been a lot of words, little implementation, which is good.”

But Europe’s exemption from the steel and aluminum tariffs will end on May 1, unless a deal is reached. And both Mr. Xi and Mr. Trump need to look strong and determined.

So there is wariness in Europe, fueled by the strong anti-multilateralist tenor of senior Trump officials and the resignation of Gary D. Cohn, who as Mr. Trump’s chief economic adviser had seemed a voice of restraint.

Brussels feels vulnerable, said Stefano Stefanini, a former Italian ambassador who is now a security consultant based in Brussels.

The European stance so far, he said, is a mix of tactics, strategy and denial.

The tactics are to threaten retaliation against American goods. The strategy is to hedge its bets between Washington and Beijing, in part depending on whether it is exempted from the tariffs. The denial is the less-than-certain hope that negotiations will avoid the worst.

But if the United States “declares an all-out war on the W.T.O. and the international free trade system while China becomes its defender,” Mr. Stefanini said, “the E.U. will inevitably be pushed on to China’s side.”

Neutrality is difficult, he said, “when you’re already under attack,” especially given that the binding essence of the European Union is free trade and the global rule-based order.

Guntram B. Wolff, the director of Bruegel, the Brussels-based economic research institution, argued in a blog post that the European Union needed a response to Mr. Trump’s challenge to global trade that is not based on “wishful thinking.”

The bloc is right to try to preserve the global trading system and to bring Washington and Beijing to the table, Mr. Wolff said. But Europe will also find itself under pressure if China starts redirecting its steel to Europe, as Russia is likely to do with its aluminum.

“Will lobby pressures become so great that the E.U. will also feel compelled to raise tariffs?” he asked.

Europe’s best response, Mr. Wolff suggested, is to put greater focus on its domestic market in order to reduce its dependence on global trade. Europe should, he said, increase its domestic investment, promote innovation in the new digital economy currently dominated by the United States and China, and spend more on its own defense.

“This strategy will not be easy,” Mr. Wolff said. But reducing dependency, he added, is the best answer to “the formidable challenge that President Trump poses for our prosperity and security.”