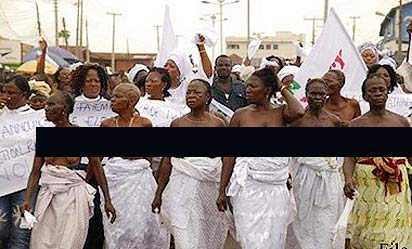 South-East based groups, the Igbo Women Assembly, IWA, and the Igbo Youth Movement, IYM, Sunday, described as falsehood allegation by the Department of State Services, DSS, over the killing of five Northerners.

The DSS had alleged that the five Northerners were killed and buried by some members of the Indigenous People of Biafra, IPOB.

However, IWA, in a statement signed by its leader, Chief (Mrs.) Mariah Okwor said it “condemns in no uncertain terms the patently false allegation by the DSS, that IPOB killed 5 northerners and buried them in a forest in Aba.

“This calculated blackmail is probably plotted to give IPOB a bad name. IPOB has never been and cannot transform into a violent organisation.

“IPOB is a mass movement of millions of Eastern Youths, who are frustrated and disenchanted with Nigeria as presently structured. Those who came up with this spurious accusation had a better look for a better story to tell.”

“The Igbo Women Assembly, know that the extra-judicial killing of these unarmed IPOB youths, which could have radicalized them in turning violent, did not achieve that, therefore, we do not believe that the age old brigandage of Fulani herdsmen would now turn IPOB into murderers overnight.

“Nobody believes the DSS funny story,” the group added.

Similarly, the IYM said it would have ignored the DSS allegations, but for the grave implication it portends.

In a statement by its President, Evang. Eliot Uko, it said “after careful enquiries from IPOB leaders, we stand by their story, that IPOB will never come down low to kill innocent people in cold blood.

“Therefore, the IYM pleads with the DSS to make public the IPOB members who killed this 5 northerners, the circumstances of their death, venue, date and event that led to their killing. Unless the DSS avails Nigerians with a detailed account, we find it tough to believe this very strange story.”