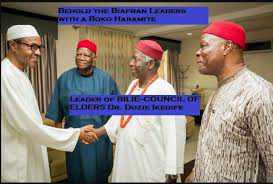 It is quite unscrupulous of some of the elders to have constantly maintained a position of sycophancy, betrayal,second fiddle, fraud, ineptitude and blatant irrelevance.

The likes of Ikedife should at the time focus on mending their lives in preparation for an almost near call to oblivion. I am personally worried that a seemingly elder like this man is still devoting his remaining life to betraying his ancestors and the entire Igbo race. It is shameful that a faceless man  never known before has decided to let the world know him as a betrayer and a saboteur.

His own IPOB is not the Indigenous people of Biafra but “Insubordinate Politicians Of Biafra “. He is only standing as an impostor and most be completely avoided by any Biafran in general and IPOB in particular. This foolish elder who dug his left finger into his anus and thereafter into his mouth should be avoided totally.

It will interest me to demand from this man a complete detail of his role in the Biafra-Nigeria war of 1967 because  one has not found his name in that record just as it did not take me anytime to see the efforts of General Joe Achuzie, then I can say, Ojukwu I know, Achuzie I know, who art thou Ikedife?

The Niger Delta Avengers are a group of people who are now aware of the high level of marginalisation. Intimidation, cheating and lying by the Government, these guys are fighting the Government for not taking care of their people who are dying in scores out of poverty and neglect and coming out to condemn them in the name of the Ingenious People of Biafra is unacceptable.

He should rather speak for his group, the Insubordinate Politicians Of Biafra, and that could be ignored by the good people of IPOB who are fully aware of the saboteur role of Ikedife.

Ikedife, all your activities are well known and recorded, at the right time you will hear the verdict of history.