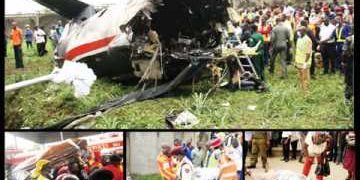 Another tragedy struck in Lagos on Thursday morning when a chartered aircraft carrying the remains of a former Governor of Ondo State, Dr. Olusegun Agagu, 20 passengers and crew crashed less than a minute after take-off from the local wing of the Murtala Muhammed International Airport, Ikeja.

The Embraer 120 aircraft with registration number SCD 361 belonging to Associated Aviation Limited, was heading for Akure in Ondo State where dignitaries, family members, friends and associates of the former governor, had gathered for his final burial ceremonies. Agagu died on September 13 in Lagos.

Although the metal casket bearing his body was recovered intact, 13 out of the 20 passengers aboard the flight were confirmed dead by the management of the AAL.

Others, who survived the crash, were rushed to the Lagos State University Teaching Hospital, Ikeja and the nearby Nigerian Air Force Hospital for treatment.

Feyi, Agagu’s son, who was speculated to have died in the crash, was one of the survivors. But, Deji Falae, the Ondo State Commissioner for Tourism and son of a former Secretary to the Government of the Federation, Mr. Olu Falae, was not as lucky.

The manifest listed Soroh Elaiye, Felix Fateye, Yakubu Oyinlola, and Owolabi Ibrahim as the crew members of the 23-year-old aircraft which last flew on August 30, 2013.

The airline said, “We can account for seven survivors, while the remaining 13 people were dead.” Mr. Tunji Okusanya, owner of Nigeria’s most popular coffin marketer /maker, MIC Funeral Company; his son, Olatunji, and Duru were said to be among those that were killed in the crash.

Thursday’s crash happened 16 months after that of an MD 83 aircraft belonging to Dana Airline occurred in the Iju-Ishaga area of Lagos, claiming 159 lives on June 3, 2012.

The casket was recovered by rescue agencies at the tank farm of Sahara Group, where the plane marked 5NBJY, crashed.It was conveyed in an NAF Ambulance with registration no AF 054 -Eo1 to the NAF hospital, a few minutes after 12 noon.

The plane broke into two with its cockpit compartment seriously burnt, while the remaining part that included the luggage compartment where the casket was, was slightly burnt.

The remains of the former University of Ibadan lecturer were due to be interred in Ondo State this weekend after a series of events by the state government.

One of the sources, who confided in The PUNCH, said the pilot tried to return to the airport when the aircraft crashed about 800 metres away from the airport.

Others included the Nigerian Air Force personnel and officials of the Lagos State Traffic Management Authority.

The LASEMA General Manager, Mr. Rasaq Fadipe, who was one of the top government officials at the scene of the crash, said the agency received a distress call around 9.30am and immediately mobilised men and equipment to the site.

“We took three fire fighting trucks,each with 10,000 litres of water, which my men used to extinguish the fire that affected the cockpit compartment of the aircraft,” he said.

The Accident Investigation Bureau confirmed the recovery of the two black boxes of the plane.

The Director of Engineering, AIB, Mr. Emmanuel Dialla, said “We have succeeded in picking the two black boxes, which will give us an insight into what really happened.”

There was however initial confusion over the actual number of persons aboard the flight.

While the Ministry of Aviation put the number of persons at 27, the Federal Airports Authority of Nigeria and the AIB said they were 20.

The Special Assistant to the Minister of Aviation, Mr. Joe Obi, had said in a statement, “An Embraer aircraft operated by Associated Airlines with Reg. No. SCD 361 en-route Akure from MMA, Lagos, crashed shortly after take-off at about 9.30am local time.

“The plane had 20 passengers and seven crew members on board. The majority of the people on the ill-fated aircraft have been accounted for. However, rescue operations continue to look for one soul, who was on board the plane and who is still missing.

“Emergency rescue operations commenced immediately by a combined team of Fire Service and security personnel. We can confirm that there were six survivors on the aircraft. Four are in a stable condition while two are critical. All are receiving full medical attention in the hospital.”

But a commissioner in the AIB, Shehu Usman, said at a news conference in Abuja, that 20 persons and not 27 were on board the ill-fated flight.

Usman said, “There were 20 people on board.Thirteen of them were passengers and seven were crew members, which included two pilots, two cabin crew members and engineers.

“The plane had a 30-seat capacity. From four survivors which we had initially, we now have six survivors.”

He added that the bureau would not ” release the names of the casualties or the hospitals where they are until we have contacted the families involved.”

Usman, who also said that rescue operations at the scene of the accident ended at about 11.50am, also declined to give the age of the Brazilian made Embraer aircraft.

The General Manager, Corporate Communications, FAAN, Mr. Yakubu Dati, who spoke at the scene of the crash, said, “We confirmed today(Thursday) the crash of an Embraer 120 belonging to Associated Airlines near JUHA premises of the MMIA. The propeller aircraft marked 5N-BJY crashed around 0932hrs on its way to Akure with 20 passengers on board .

“The rescue operation commenced immediately with all the relevant agencies moving en masse to the crash site. The Black Boxes of the aircraft have been recovered. Some of the survivors are already receiving treatment at the hospital while rescue operation is still in progress. An emergency response centre has been set up at the NCAA medical conference room.”

The Lagos State Commissioner for Special Duties, Dr. Wale Ahmed, said the government would perform autopsy on those that died in the crash before releasing their remains to their families.

The Minister of Aviation, Stella Oduah, who sympathised with the families of the deceased, said full investigation into the cause of the accident had commenced.

Urging the public to be patient, she said in a statement that the nation’s airspace remained safe and secure.

The statement reads in part, “The Federal Ministry of Aviation deeply commiserates with the families of the victims. Our thoughts and prayers are with them at this difficult time.

“The Black Box of the aircraft has been located and is in the custody of the Accident Investigation and Prevention Bureau who, with the cooperation of the Nigerian Civil Aviation Authority and other relevant agencies has commenced full investigation into the cause of the accident.

The Chief Operating Officer, AAL, Alhaji Taiwo Raji, said, “We can account for seven survivors while the remaining 13 people are dead. There were 20 souls on board. It was a very unfortunate incident.

“We have 10 aircraft in our fleet and six serviceable aircraft and the last A-check maintenance was done on June 14, 2013. And the plane was insured by Sema insurance company and Nigerian Re-insurance.”

The company had earlier on Thursday said it was “currently co-operating fully with the aviation regulatory authorities with a view to establishing the remote and other causes of this most regrettable accident.”

It also assured that it would “continue to provide information on this accident firstly to the affected families out of respect for them.”