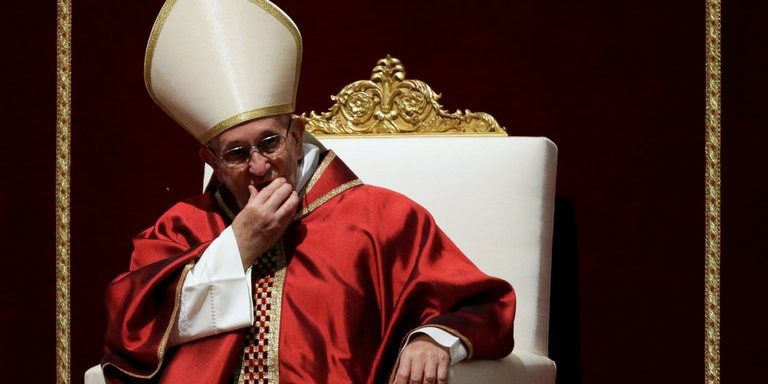 ROME — The Vatican felt obliged this week to reaffirm that Pope Francis believes in a central tenet of Catholicism, that there is a hell.

That odd declaration came after the newspaper La Repubblica published a front-page article on Thursday by an atheist, left-wing and anticlerical giant of Italian journalism, who reported that during a recent meeting the pope had said hell did not exist.

Bad souls are “not punished,” the journalist, Eugenio Scalfari, 93, reported the pope as saying. “A hell doesn’t exist.”

Nor, for Mr. Scalfari, does a tape recorder or notebook or the orthodoxy of quotations marks.

The Vatican characterized the remarks as misquotations.

In the past, Mr. Scalfari, the founder of La Repubblica, a bible of the Italian left that he edited for decades, has admitted to sometimes putting words in the papal mouth.

But the infernal remarks, especially as the pope prepared for Easter Sunday celebrations, proved too tempting for international tabloids, conservative websites antagonistic to the pope and many others to let go.

“Pope Declares No Hell,” read a screaming headline across the Drudge Report website.

“Does the Pope Believe in Hell?” asked Patrick J. Buchanan in an online column.

The pope, in fact, has often talked about hell as a very real final destination for the wicked, and the Vatican made clear that the “literal words pronounced by the pope are not quoted” and that “no quotation of the article should be considered as a faithful transcription of the words of the Holy Father.”

“They are perfectly right,” said Mr. Scalfari in an interview on Friday night, as the pope prepared for a ceremonial leading of the stations of the cross on Good Friday. “These are not interviews, these are meetings, I don’t take notes. It’s a chat.”

While Mr. Scalfari said he remembered the pope saying hell did not exist, he allowed that “I can also make mistakes.” He said he had committed an error of omission by failing to fully explain the pope’s answer on the need for a stronger Europe. “At my age,” Mr. Scalfari said, he was more used to being interviewed than interviewing.

The editor of La Repubblica, Mario Calabresi, said the paper had not labeled Mr. Scalfari’s piece as an interview. It was, Mr. Calabresi said, the fruit of a “cultural exchange and dialogue out of the 19th century between a Jesuit believer and a man of the enlightenment fascinated by religion.”

Sophisticated readers of Italian journalism understand how to read Mr. Scalfari, which is to say, with a grain of salt when it comes to papal quotations.

To many here, Mr. Scalfari personifies an impressionistic style of Italian journalism, prevalent in its coverage of the Vatican, politics and much else, in which the gist is more important than the verbatim, and the spirit greater than the letter.

And yet, despite the public relations headaches Mr. Scalfari has caused, Francis, 81, seems to like talking to him.

The pope, Mr. Scalfari said, has a “need to talk with a nonbeliever who stimulates him.” This month’s meeting was their fifth.

In September 2013, Francis sent a letter to Mr. Scalfari, later published in La Repubblica, in which the pontiff wrote that atheists should “abide by their own conscience” and said that Christians should engage in “a sincere and rigorous dialogue” with nonbelievers.

Weeks later, the pope had a long discussion with Mr. Scalfari, the reconstructed transcript of which the journalist published in La Repubblica.

“Each one has his idea of good and evil and must choose to follow the good and fight the evil as he understands them,” the pope said, according to Mr. Scalfari. He added that efforts to convert people to Christianity amounted to “solemn nonsense.”

At first, the Vatican’s spokesman at the time, the Rev. Federico Lombardi, confirmed the interview as “faithful to the thought.” He subsequently published the article in its entirety on L’Osservatore Romano, the Vatican’s official outlet, and in a space on the website of the Holy See usually reserved for papal speeches.

Then the Vatican, which recently digitally blurred out embarrassing lines of a letter sent by Pope Benedict XI, removed the text from its website. “There were some misunderstandings and disagreements about its value,” Father Lombardi said back then.

The two men spoke again in July 2014, and Mr. Scalfari published an article in which he said the pope had estimated that 8,000 members of the clergy, including bishops and cardinals, were pedophiles and that perhaps priestly celibacy should be reconsidered.

The Vatican responded by asking whether a lack of quotation marks suggested “an attempt to manipulate some naïve readers.”

In 2015, Mr. Scalfari quoted Francis as having said that “all the divorced and remarried who ask will be admitted” to Communion. Father Lombardi responded that observers “know the way Scalfari writes.”

But throughout, the Vatican has seemed reluctant to bring down the hammer on an erudite man toward whom the pope apparently had grown affectionate.

Francis stayed in touch with Mr. Scalfari, calling him on the phone and inviting him in for another long chat in November 2016. Mr. Scalfari described their warm greetings and reported that the pope said, “It is the communists who think like Christians.”

This week’s controversy is not the first time Mr. Scalfari and the pope have visited the subject of hell. In October 2017, Mr. Scalfari wrote, “Pope Francis has abolished the places where souls were supposed to go after death: hell, purgatory, heaven.”

But the pope, who is surrounded by a court full of politically attuned cardinals, yes men and conservatives trying to undercut his mission, keeps coming back to Mr. Scalfari.

“We’ve become friends,” Mr. Scalfari said, recalling that the pope helped him into his car during the last visit, and that this time he walked him to the door. “He blessed me, but knowing that I’m not faithful, he blew me a kiss. And I responded in the same mode.”