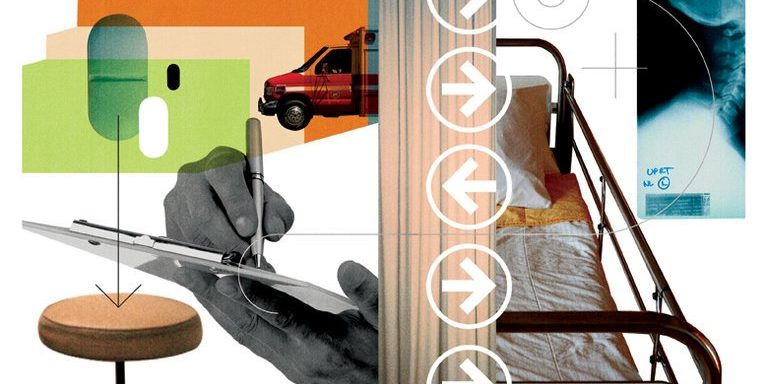 You’ve Detailed Your Last Wishes, but Doctors May Not See Them

This is not how it was supposed to happen.

I was working overnight when my pager sounded, alerting me to an admission to the intensive care unit. I logged on to the computer and clicked on the patient’s chart, scanning the notes that tracked his decline. First there was a cancer diagnosis, too far gone for cure, then surgery, recurrence, surgery, and finally, a discharge home. The elderly man had been found there earlier that evening, pale, feverish and too confused to communicate.

Now he was in the emergency department, his breaths ragged. “There’s no family around. We’re probably going to have to intubate,” the emergency room doctor told me when I called him to learn more about the patient. I sighed, wondering what this man would have wanted, if only he could tell us.

I was surprised when, a few seconds after I hung up the phone, one of the doctors in training tapped me on the shoulder and pointed urgently at the computer screen. There was something important there at the very end of an otherwise unremarkable progress note from the patient’s outpatient oncologist. Just a few weeks before, doctor and patient had talked about how they were at the end of the road, without further therapies to slow the growth of the cancer. Facing a prognosis on the order of months, the elderly man had requested that when things got worse, there would be no breathing tubes or chest compressions. Only comfort and quiet.

But now he was unable to speak for himself. Too busy with X-rays and ultrasounds and medications, the emergency team hadn’t seen the note. I sent a page off to the attending taking care of the patient to alert him to the patient’s wishes, and my resident gathered his papers to run down to the emergency room.

This patient had done everything we could have asked. He’d been brave enough to talk with his doctors about his cancer and acknowledge that time was short. He had designated a health care proxy. But there he was, surrounded by strangers, the intubation he never would have wanted looming and the record of that conversation buried in his electronic record.

Something had gone wrong. And though it would be easy to blame the oncologist for not sending the patient home with a legally binding directive documenting his end-of-life wishes, or the emergency doctors for not searching harder in the chart, it’s not that simple. As it usually is with a surgery performed on the wrong side of the patient’s body or a medication that’s prescribed despite a known allergy, the problem here is not about individuals, but instead about a system that doesn’t sufficiently protect patients from getting care they do not want.

Increasingly, doctors like me are trained to have frank, hard conversations with our patients about prognosis and care goals. Outside the hospital, people with serious illnesses are encouraged to discuss these issues with their friends and family. But what happens after?

It’s tempting to assume that if you tell one doctor what you want at the end of your life, that’s enough — what you want will be clearly documented and retrievable when it is needed, and the record will follow you wherever you go. Yet this critical information is sometimes not documented even when conversations do happen, or scattered through our electronic records, only intermittently accessible (and often only with time-consuming searching), with few standards or best practices to guide us.

For the past year, I delved into the unexpectedly interesting world of advance care planning and electronic health records, interviewing clinicians with on-the-ground experience recording and retrieving these conversations and representatives from the companies behind some of the most widely used electronic records.

As a doctor working in the I.C.U., I knew firsthand the frustrations of searching the electronic record for notes and scanned documents. But I had no idea how common this problem was.

Through my interviews, I heard stories of patients who had been transferred to nursing facilities without their advance directives and returned to the hospital intubated when that was explicitly not what they wanted. Others told me about patients of theirs who’d grown ill on vacation only to end up in a hospital they’d never been to, with an entirely different electronic medical record, where no one was able to access any prior documentation. Others described situations in which last minute “saves” through extreme diligence or chance, such as the one I experienced, had led to a good outcome.

There are few existing regulations here, as the Centers for Medicare and Medicaid Service are relatively silent on advance care planning. In contrast to the rules around allergies, which mandate that all patients have an active med allergy list, electronic records simply need to have the capacity to show whether or not a patient has an advance directive, somewhere. They don’t even need to make the directive retrievable.

In the absence of nationwide standards, there’s significant variability among hospitals and among electronic records. Some have worked to make end-of-life documentation more easily accessible. At my hospital, for example, clicking on an “Advance Care Planning” tab will bring you to a record of all advance care planning notes, health care proxy forms, scanned directives and code status orders. This is a start, but it wasn’t enough for that elderly man in the emergency room. Habits are hard to break, and without a clear set of incentives, training and ongoing education, doctors (myself included) continue to record information about end-of-life conversations in progress notes, where they are not readily available, particularly when they are urgently needed.

Recently, a handful of start-ups have stepped in, trying to offer a solution to the fact that different electronic records can’t communicate with each other. There’s software and clever patient apps that work outside the electronic record, promising to build a repository of directives, proxy forms, even conversations. Just imagine, your E.D. doctor is fumbling to find your information in your chart, but you have an advance directive that was safely uploaded onto your smartphone. This most likely could have helped my patient that day — if he had a smartphone and was able to show it to his doctors, or if his hospital had committed to buying the necessary software.

What could really make a meaningful difference, I heard time and time again, is standards for sharing, or “interoperability” across all electronic records that would benefit every patient, everywhere. At least, all related advance care planning documentation should be in one place in the medical record and accessible with one simple click of the mouse. Beyond that, maybe all health systems could require identification of a health care proxy for all patients, so we would know who should make decisions if the patient can’t. Maybe patients should be able to access their health records through a patient-facing interface, send in their own directives, or even update related notes. Ideally, the electronic record isn’t just a clunky online version of a paper chart but actually a tool to help us do our jobs better.

Yet as it is, we’re playing catch-up. Which is how my patient ended up in the hospital that night, with a team of well-meaning doctors readying to do something to him that he never would have wanted, and a resident racing down to the emergency room because he’d happened upon a note.

When the resident arrived outside my patient’s room, he was relieved to see that the elderly man was still breathing on his own. The E.D. attending had held off. The patient’s family was on the way. Up in the I.C.U., we treated him gently with fluids and antibiotics and oxygen. He never did get strong enough to make it back home, but I think he was quiet and comfortable in the end, as he had wanted.

At the time, that felt like success. But looking back, I realize that we were just lucky — and that’s not enough.

Daniela Lamas is a doctor at Brigham and Women’s Hospital in Boston and the author of “You Can Stop Humming Now: A Doctor’s Stories of Life, Death, and in Between.”