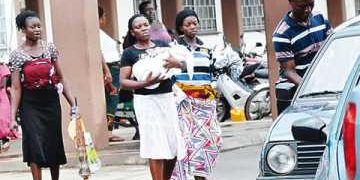 The strike embarked upon by members of the National Association of Resident Doctors has paralysed activities in public hospitals across the country.

NARD had embarked upon the strike to force the Federal Government to pay arrears of salaries being owned the medical doctors.

Reports by some of our correspondents and the News Agency of Nigeria revealed that more branches of the association had joined the strike.

Consequently, patients are being hit hard while relatives of some of the sick are being forced to take their sick to private hospitals.

Resident doctors in Oyo, Ogun, Ondo, Bauchi, Kwara states and Abuja have joined the nation-wide strike called by their national

The NARD Chairman at the University College Hospital, Ibadan, Dr. Babatunde Babasanya, said on Wednesday that the doctors were seeking the payment of salaries being owed them.

He also said the Federal Government’s implementation of the Integrated Payroll and Personnel Information System had not been effective in spite of the fact that many doctors were short paid.

Babasanya said, “Some House Officers in Lagos have not been paid for four months till recently when they paid them only two months.

The NARD boss also said that the residency training programme had come under severe challenges, especially in terms of under funding.

A NAN correspondent, who visited the tertiary health institution on Wednesday, reports that consultants and other health workers were attending to patients.

In Abeokuta, striking resident doctors at the Federal Medical Centre appealed to the Federal Government to embrace dialogue in order to end the strike.

The NARD president at the centre, Dr. Ibrahim Adewale, made the appeal while speaking with journalists on Wednesday in Abeokuta.

Adewale, who noted that patients were always at the receiving end whenever doctors embarked on strike, urged the two parties to resolve the dispute.

A NAN correspondent, however, sighted a few consultants and other health workers on duty at the medical centre.

The Chief Medical Director of the centre, Dr. Dapo Sotiloye, declined comments, saying ” it is between the doctors and the Federal Government.”

Some of the patients, who spoke in separate interviews, appealed to the two parties to consider the plight of ordinary Nigerians.

One of the patients, Alhaji Fatai Salisu, lamented the attitude of some nurses at the centre and appealed to the doctors to return to work.

Mr. Dada Abiodun, whose wife was on admission prior to the strike, said he might relocate her to another hospital.

Also reacting to the strike, the Chairman, Nigerian Medical Association, Kwara Chapter, Prof. Mikail Buhari, said the doctors were committed to the full implementation of the strike option.

He said that the strike followed the expiration of a 21-day ultimatum earlier declared by NARD.

Buhari said members were directed to embark on the strike due to “persistent unwillingness of the Federal Government to articulate a comprehensive guideline for residency training.”

Our correspondent who visited the hospital on Tuesday observed that many patients that trooped into the hospital for care oblivious of the strike were surprised when none of the resident doctors attended to them.

Though consultants at the hospital took over the responsibilities of the striking resident doctors, it was obvious that they were overwhelmed by the number of patients waiting for medicare.

Efforts by one of our correspondents to get the responses of the UITH Chief Medical Director, Prof. Abdulwaheed Olatinwo and the Kwara State Chairman, NARD, Dr. Dele Tajudeen proved abortive as their phone numbers indicated they were switched off.

But the Kwara State Chairman, Nigerian Medical Association, Prof. Olayinka Buhari, who is a consultant at UITH, said the consultants had taken over the treatment of patients that were being attended to by the striking doctors especially, those in critical conditions.

A Bauchi resident, Malam Auwal Bala, told NAN that he took his pregnant wife to the hospital around 1am, but was told that doctors were on strike, and advised was to move her to a private clinic.

In Lagos, only consultants offered skeletal services to patients in all the public hospitals particularly those owned by the Federal Government.

President of the association’s LUTH Chapter, Dr. Emeka Ugwu, told NAN in Lagos that they joined the strike on Wednesday.

A Consultant Psychiatrist at the Federal Neuro-Psychiatric Hospital, Dr. Olugbenga Owoeye, said that the resident doctors at the hospital joined the strike at midnight on Tuesday.

In Abuja, resident doctors were on Wednesday conspicuously absent at their duty posts.

However, in some of the hospitals monitored in Abuja except for National Hospital Abuja and University of Abuja Teaching Hospital, Gwagwalada which were affected by the strike, doctors were seen attending to patients.

Meanwhile, the Minister of Health, Prof. Onyebuchi Chukwu, has expressed disappointment over the strike, saying that the action was uncalled for as those issues brought by the association were already being looked into.

Speaking through his special assistant on media and communications, Mr. Dan Nwomeh, he said that the issues were currently being addressed by a committee set up by the Head of Civil Service of the Federation.

However, the minister said that a meeting has been scheduled with all the parties concerned including the minister of labour, Emeka Wogu on Thursday (today).