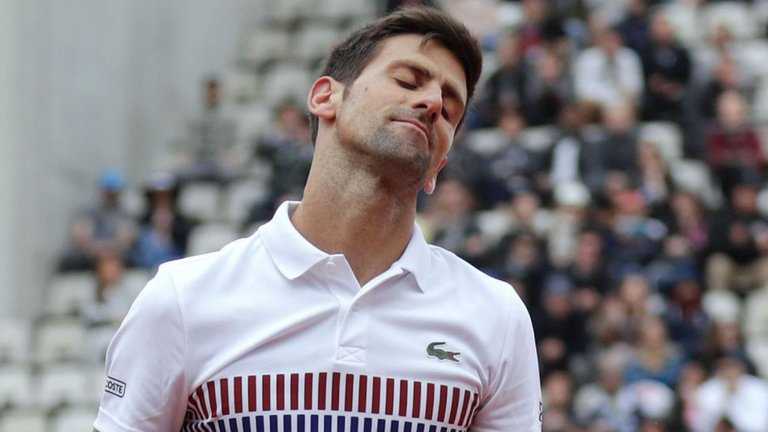 Novak Djokovic says he is trying all he can as he attempts to arrest a slump that has left him on his longest run without a Grand Slam title since 2014.

The former world no 1 was beaten in straight sets by Austria’s Dominic Thiem at the French Open and having lost to Denis Istomin in the second round of the Australian Open his downward spiral comes into sharper focus.

He left Roland Garros last year having beaten Andy Murray in the final to complete a career Grand Slam and become the first man since Rod Laver in 1969 to hold all four major titles at the same time.

This year, he exits Paris with question marks over whether he can return to the heights that have seen him capture 12 career Grand Slam titles, but Djokovic is determined to find answers.

“The last couple of tournaments I have had some great match matches and it is unfortunate to finish Roland Garros the way I have done,” he told the press after his defeat.

“I always expect a lot from myself but it is a fact that I am not playing close to my best and I know that.

“I am trying, like everyone does, to work on my game and work on things.

“For me, this is a whole new situation that I am facing especially in the last seven/eight months not winning any big tournaments which hasn’t happened in many years.

“All the top players have been through that so I guess you have to go through it and learn your lessons and figure out a way to back it better. It’s a big challenge but I am up for it.”

Asked whether taking a break from the game might be on his agenda, Djokovic was not committal but having taken drastic action to part with his whole team before appointing Andre Agassi the Serb is leaving no stone unturned in his pursuit of returning to his very best.

“I am thinking about many things especially over the last couple of months,” he added when talking to the assembled media.

“I am trying to sense what is the best thing for me now.

“Obviously, there has been a lot of changes with the team and I am excited to work with Andre and the new team but I have a responsibility to the game and others.

“It is not an easy decision to make, I will see how I feel after Roland Garros.”

The manner of his defeat will have alarmed Djokovic too, 17 unforced errors in the first set handed Thiem the opener while he also suffered a first ‘bagel’ at a Grand Slam since the 2005 US Open first round against Gael Monfils.

Although Djokovic was quick to praise the performance of 23-year-old Thiem who had lost all five previous meetings between the pair.

“It is hard to comment on the third set, nothing was going my way and everything his way, so a pretty bad set,” he added.

“All in all I think it was decided in the first set and then I lost a crucial break at the beginning of the second.

“He started serving better and backing it up with the first shot – he deserved to win, he was definitely the better player out on the court today.

“He made it difficult, he has really heavy spin and he can also play very quick. He has got an all-round game for clay courts and he is a tough player to play against.

“It was not there for me today, especially in the second part of the match. I was unable to hit the ball well and hit many unforced errors. He was getting better and better and more and more confident as the match progressed.