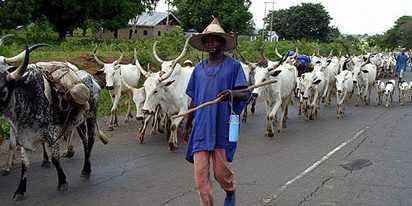 The carnage which started on Sunday in Gbajimba, Guma Local Government Area in Benue State continued yesterday as suspected

The number of Tiv farmers killed so far in Gbanjimba stand at 51.

Special Adviser to Governor Gabriel Suswam on Investment, Abraham Kwaghngu, told The Nation that the attackers, who were over 200, launched another round of attacks yesterday morning and set many houses ablaze.

“As I speak, the gunmen are burning Gbajimba, unchallenged, in the presence of soldiers deployed to the area.

“We have counted 26 bodies, I think the soldiers just came to supervise burning of Gbajimba,” said Kwaghngu.

The All Progressives Congress (APC) lawmaker representing Makurdi North , Avine Agbom, told our correspondent that half of Gbajimba has been reduced to rubbles.

“Soldiers went to Gbajimba with three Armoured Personal Carriers (APCs), but stood by and watch as helpless Tiv farmers were killed indiscriminately and their houses set ablaze.”

He accused soldiers of conniving with Fulani herdsmen to kill Tiv farmers.

A Fulani man has been lynched to death by a mob in Gboko. According to an eyewitness, the Fulani man was brought to a bank in Gboko by Uwouku Abanka, the father of a Peoples Democratic Party(PDP) governorship aspirant, Andy Uwouku.

It was gathered that the elder Abanka’s driver had allegedly tipped some hoodlums that his boss was coming to the bank with a Fulani.

The hoodlums waylaid the Fulani man, who was dressed like a Tiv traditional chief, in front of the bank and hacked him to death.

Uwouku escaped but his vehicle was set ablaze in the front of bank.

It took intervention of armed policemen before normalcy was restored.

On Gbajimba attack, he said he was yet to get the report.

Former Attorney General and Minister of Justice Mike Aondoakaa has condemned the killing.

The former minister said the attack on Benue could bring about famine as farmers were being killed daily.

Aondoakaa called on the National Emergency Management Agency (NEMA) to assist the victims.