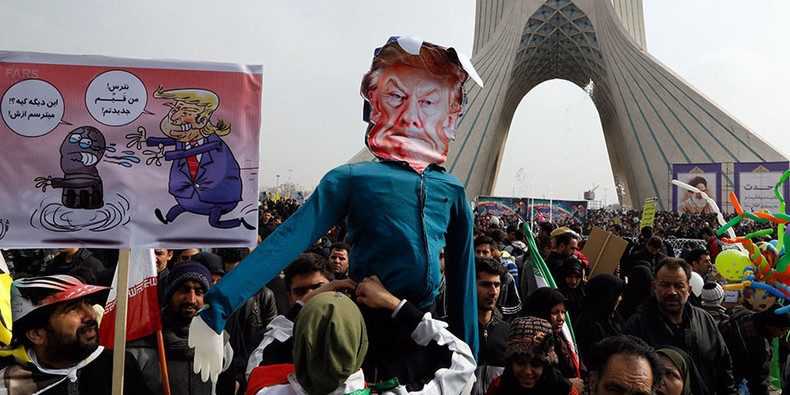 On the anniversary of Iran’s 1979 Islamic Revolution, which saw the ousting of the former US-backed House of Pahlavi, a flood of protesters headed towards Tehran’s Azadi (Freedom) Square with Iranian flags, celebrating the rule of the current clerical establishment.

Some also carried effigies of Trump, as well as banners reading “Death to America,” the footage showed, to the sound of traditional Iranian revolutionary songs played by police military ensemble.

The protest comes after Iran’s most powerful authority, Supreme Leader Ayatollah Ali Khamenei, called on Iranians earlier this week to demonstrate against the US to show Iran was not frightened of their “threats.”

“[Trump] says ‘You should be afraid of me.’ No! The Iranian people will respond to his words on February 10 and will show their stance against such threats,” Khamenei said on Tuesday.

Last week Fox News published an interview with Donald Trump, in which he said “they [Iran] have total disregard for our country, they’re the number one terrorist state, they’re sending money all over the place and weapons,” referring to accusations frequently coming from the West that Tehran is supporting various Shiite rebel groups in the Middle East, including the Lebanese Hezbollah, the Palestinian group Hamas and the Houthis in Yemen.

Earlier in February, the US also imposed new sanctions on Iran in response to a ballistic missile test, which Trump’s National Security Advisor Mike Flynn described as provocative and destabilizes the situation across the Middle East.

The US claimed the test violated UN Security Council Resolution 2231 which called on Iran “not to undertake any activity related to ballistic missiles.” Flynn said that the Trump administration “condemns such actions by Iran,” and has “officially put Iran on notice.”

Addressing the crowds on Friday, Iran’s President Hassan Rouhani also called on Iranians to “show their unbreakable ties with the Supreme Leader and the Islamic Republic.”

“Some inexperienced figures in the region and America are threatening Iran […] They should know that the language of threats has never worked with Iran […] They should learn to respect Iran and Iranians […] We will strongly confront any warmongering policies,” Rouhani told the crowd at the Azadi Square, as cited by Reuters, which reported that millions had shown up to commemorate the occasion across the country.