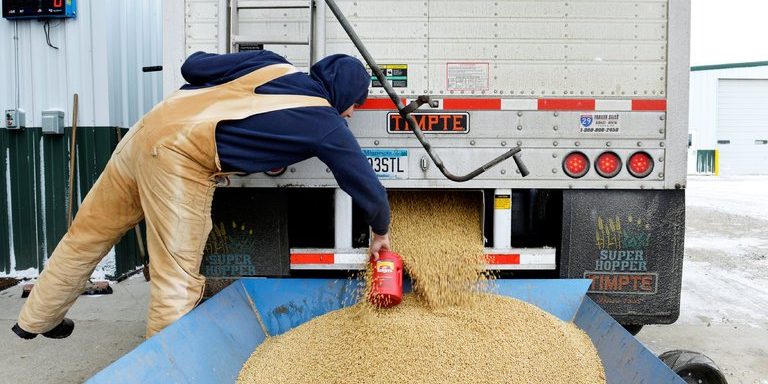 Supported by DealBook Briefing: The Heat Is Rising in the U.S.-China Trade Fight

Good Wednesday morning. Investigators are looking into the motive behind the shooting at YouTube’s headquarters. What happens after Spotify’s direct listing? And Alexis Ohanian of Reddit speaks to Corner Office about online platforms, fatherhood and Metallica. Some links require subscriptions.

Next steps in the tariffs tit-for-tat

Beijing moved quickly to escalate its fight with the U.S., responding to the White House’s latest move with $50 billion worth of tariffs on soybeans, cars, chemicals and more. U.S. market futures predictably dropped, as did other markets.

Both sides could suffer. Chinese companies are scrambling to react, especially as the U.S. looks to be taking aim at technology (like that central to Made in China 2025). And the squeeze could extend to American companies in unexpected industries, like wine.

The big question: Is a full-blown trade war coming? Nathaniel Taplin of Heard on the Street writes, “If ongoing negotiations fail and these tariffs become a reality, the long-term impact will likely be far more damaging.”

The video site and its parent company, Alphabet, are still grappling with the shooting at YouTube’s headquarters in the Bay Area yesterday. What we know: Police identified the shooter as Nasim Najafi Aghdam, who was in her late 30s and killed herself at the scene. Three people were hurt, one critically.

What we don’t know: the motive. Ms. Aghdam, who posted to YouTube and other social media, criticized the video site’s policies on Facebook in February. But authorities haven’t highlighted any specific grievance, and said they had yet to find evidence that specific individuals were targeted.

What may change: security in Silicon Valley. YouTube, like many other big tech companies, doesn’t have visible metal detectors or armed guards.

The music-streaming giant listed its shares on the N.Y.S.E. (even if the Big Board briefly flew the wrong country’s flag). It’s now valued at $26.5 billion.

Does that count as a success? Shira Ovide of Gadfly argues no, since only a tiny fraction of Spotify’s shares are available to trade.

And will it lead to a wave of direct listings, leaving depressed, workless I.P.O. bankers in its wake? Maybe not, though the Big Board acknowledged signs of more informal interest in direct listings.

Peter Eavis’s take: Spotify’s main rivals could complicate things. What if Amazon improves its terms for record companies? That would hit Spotify’s bargaining power, and make it harder to deliver the wider gross margins investors expect.

• Robert Mueller reportedly told President Trump’s lawyers that he’s a subject of interest, but not yet an investigation target. A former Skadden lawyer who admitted deceiving Mr. Mueller’s investigators, Alex van der Zwaan, was sentenced to 30 days in prison and fined $20,000.

• The Treasury Department and the Office of Management and Budget are fighting over how to implement the tax overhaul, as businesses go to great lengths to lower their tax bills.

• John Williams is the next president of the New York Fed, despite calls for diversity. (NYT)

WPP’s C.E.O., a giant in the ad world, is under investigation

At issue in WPP’s inquiry into its C.E.O., Martin Sorrell, are allegations of misuse of company assets and of personal misconduct, according to the WSJ. Mr. Sorrell has denied any wrongdoing.

The investigation comes at a tough time: WPP’s revenue is down, and competition from Google and Facebook is up. One of the FT’s unnamed sources couldn’t see how Mr. Sorrell would survive.

Forbes profiled All Raise, a group of 36 women trying to double the percentage of women in V.C. partner roles and to increase funding to female founders to 25 percent from 15 percent. It has commitments of $2 million from supporters like Silicon Valley Bank and is in talks with Melinda Gates’s investment firm.

What to expect from the CBS-Viacom talks

It’ll be a joust, over money and management. CBS has reportedly submitted a takeover bid for its corporate sibling, Viacom — but one below Viacom’s market value of $12.5 billion, and without a No. 2 slot at the combined company for the target’s C.E.O., Bob Bakish.

That isn’t going to sit well with either Mr. Bakish or his patron, Shari Redstone. Tara Lachapelle of Gadfly argues that ego shouldn’t hold up a deal.

• Procter & Gamble is reportedly talking to Pfizer about buying its consumer health business, but far from agreeing on a price. GlaxoSmithKline and Reckitt Benckiser both walked away. (CNBC)

• The Justice Department is relying on a skewed study of the Time Warner deal, lawyers for AT&T argued in court. (Bloomberg)

• Elliott Management has purchased a $1 billion stake in various affiliates of Hyundai Motors, another venture into Korean chaebols. (Elliott)

• The high-end coffee brand La Colombe, reportedly hired Moelis & Company to explore the sale of a stake that could value the company at $1 billion. (Bloomberg)

SoftBank finds limits to its friendship with Trump

The Japanese conglomerate has reportedly given up day-to-day control over the Fortress Investment Group to help its deal pass the powerful U.S. security watchdog known as Cfius, according to the FT. That could make the investment firm a less useful support for SoftBank’s $100 billion Vision Fund.

The takeaways: The efforts by SoftBank’s Masa Son to court President Trump don’t always translate into favorable treatment by the White House, and national security concerns will weigh heavily on foreign investment in the U.S. post-Broadcom.

Will Trump act against Amazon?

The president has pressed his claim that Amazon is “costing the United States Postal Service massive amounts of money,” (It isn’t.)

Vanity Fair reports that some specific anti-Amazon ideas have been kicked around, including rethinking Amazon’s contract with the U.S.P.S., canceling its cloud services contract with the Pentagon (more below) and encouraging state investigations.

But Bloomberg can find no active discussions about such actions, and Wall Street analysts say investors should ignore the noise, which puts Amazon in good company.

More on Amazon and the cloud: Mr. Trump was scheduled to dine last night with Safra Catz of Oracle. Why is that important?

• Tesla’s first-quarter production still fell short of an already lowered target, but shares in the embattled carmaker rose anyway. Investors might want to be wary of Elon Musk’s promises.

• India’s government is eager to collect personal data, but bad at protecting it, an NYT Op-Ed contributor argues. (NYT)

• Apple has hired John Giannandrea from Google to run its machine learning and A.I. strategy. (NYT)

• Companies’ charitable spending is more self-serving than they would have us believe. (NYT)

• An Indian government crackdown on fake news lasted less than a day. (NYT)

• The Chinese conglomerate Anbang will receive $9.7 billion from an industry rescue fund. (WSJ)

• Longfin, a fintech company that went public under small-company rules in December, lost 85 percent of value in six trading days and is now under investigation by the S.E.C. (WSJ)

• After one of its worst quarters ever, David Einhorn’s hedge fund Greenlight Capital is sticking to its strategy. (CNBC)

Note: While we congratulated Villanova yesterday, we did not congratulate Notre Dame for its win on Sunday, which we heartily do so now.