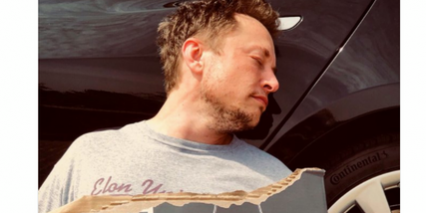 Good Monday morning. The Trump administration is expected to announce this week the list of Chinese products that will be hit with tariffs. The Chinese government this morning retaliated to the steel and aluminum tariffs that have already been announced. Some links require subscriptions.

“So bankrupt, you can’t believe it.”

Elon was found passed out against a Tesla Model 3, surrounded by “Teslaquilla” bottles, the tracks of dried tears still visible on his cheeks.

Analysts have warned of serious financial strains as the electric-car maker struggles to reach production targets for its Model 3.

Tesla has been racing to increase output to help burnish numbers for its earnings report. Its Fremont, Calif., delivery hub was packed on Saturday, and the company has been imploring workers to get production on track, Bloomberg reports.

Its semiautonomous driver-assistance system has also come under scrutiny. It was in use when a driver died in a crash on March 23 — the third fatal crash to have occurred while autopilot was deployed. The company said that the driver had ignored several warnings to put his hands on the steering wheel.

The National Transportation Safety Board said it was “unhappy” that Tesla revealed details about the collision.

The company is also facing a lawsuit over its acquisition of SolarCity: FT Lex looks at the lawsuit’s assertions that Mr. Musk exercises too much influence over Tesla.

Today’s DealBook Briefing was written by Andrew Ross Sorkin in New York, and Chad Bray and Amie Tsang in London.

Why Facebook’s rivals have stayed mum

As Facebook lurches from crisis to crisis, other tech leaders like Marc Benioff and Tim Cook have criticized the company. But, for the most part, it’s in their culture to stick together, Nick Wingfield writes.

Part of the silence, people in the industry say, comes from a desire to avoid the business equivalent of bad karma — knowing that they, too, may one day face the buzz saw of public censure.

Customers have less trouble speaking out, but those looking to punish major tech companies are finding that but boycotts are easier said than done.

At Facebook, the turmoil continued this weekend after a 2016 memo was leaked in which Andrew Bosworth, a vice president, wrote, “Maybe someone dies in a terrorist attack coordinated on our tools. And still we connect people. The ugly truth is that we believe in connecting people so deeply that anything that allows us to connect more people more often is *de factor* good.”

Mr. Bosworth and Mark Zuckerberg disavowed the memo, but the fallout has been wide, with employees calling for a hunt to find leakers.

“Mr. Zuckerberg’s comments suggest he still doesn’t get it: What matters is not whether internet companies ‘deserve’ our private information but why we as consumers do not have meaningful ways to protect that data from being siphoned for sale in the first place,” Tom Wheeler, a former F.C.C. chairman, writes in an NYT op-ed.

Hackers have stolen more than five million credit and debit card numbers from Saks and Lord & Taylor, a cybersecurity firm said. Amazon and other companies have filed patents that show how assistants could monitor what people say, information that could then be used for ads and product recommendations. For critics, this highlights the need for regulators to get more involved in data collection. Entrepreneurs, companies and governments are looking into whether blockchain could be the answer to fears about personal data being shared too liberally.

• President Trump accused The Washington Post of operating as a lobbyist for Amazon, escalating his assault on the company. He also accused Amazon of a “Post Office scam,” although Amazon brings in money for the Postal Service. (WaPo)

• A global race to automate stores is underway as retailers seek to prevent Amazon from dominating their market. China has been an especially fertile place for these experiments. (NYT)

• The tech industry has warmed to the White House. (NYT)

• The European Commission is preparing to crack down on social media companies accused of spreading fake news. (FT)

• A Russian man accused of hacking three U.S. technology companies in 2012 has been extradited from the Czech Republic. (NYT)

• Dara Khosrowshahi is trying to change Uber’s image, but can he do it without sacrificing elements that made the company successful? (The New Yorker)

• 3-D printing technology is moving into the construction business. (WSJ)

• Beijing has unveiled a pilot program that would allow Chinese tech giants to see their shares bought and sold at home. (Bloomberg)

China hits back at U.S. tariffs

The Chinese government said on Monday that it would place tariffs on the imports of 128 American-made products in retaliation for to President Trump’s tariffs on steel and aluminum.

Beijing appeared to go a step beyond its initial threat, Chris Buckley reported. On the list is pork, an important moneymaker in many states that voted for President Trump.

• Mr. Trump tweeted on Sunday that there would be no deal to protects thousands of young immigrants brought to the country as children and threatened to walk away from the North American Free Trade Agreement.

• The FirstEnergy bankruptcy could be an important moment for the Trump administration and its commitment to the coal industry. (WSJ)

• Ties to the White House have proven to be a wellspring of trouble for the Kushner family. (NYT)

• Are undersea cables used to communicate around the world under risk of attack? (AP)

• The bankruptcy of Remington, one of the country’s oldest gunmakers, has stalled a ruling in a lawsuit by family members of those killed in the Sandy Hook shooting. (NYT)

• John Bolton, the incoming national security adviser, has argued repeatedly that the United States should engage in cyber warfare. (Politico)

When the Justice Department allowed Live Nation to merge with Ticketmaster, it tried to assuage concerns that the deal would cripple competitors.

But critics have reason to be skeptical. Here’s how Beau Buffier, the chief of the New York Attorney General’s Antitrust Bureau, described Live Nation:

“It is now widely seen as the poster child for the problems that arise when enforcers adopt these temporary fixes to limit the anticompetitive effects of deeply problematic vertical mergers.”

The Justice Department is looking into complaints that Live Nation has used its control over concert tours to pressure venues into contracting with Ticketmaster, a possible violation of antitrust law.

The inquiries come as the department is reviewing two more mergers, between AT&T and Time Warner, and Disney and Fox.

The department’s new antitrust chief has said that the Live Nation deal and several other deals posed problems because they relied too much on the federal government’s ability to police corporate behavior.

“Even if we wanted to do that, we often don’t have the skills or the tools to do so effectively,” the antitrust chief, Assistant Attorney General Makan Delrahim, said in a speech.

More for your playlist

Spotify’s shares begin trading on Tuesday with a valuation that could exceed $20 billion. But the company still hasn’t turned a profit, and its direct listing could spook investors. The streaming service also is looking to take on music labels directly by “building a two-sided marketplace for users and artists.”

• Walmart’s takeover of Humana isn’t guaranteed, but hospitals are already worried that the deal could hit their bottom lines at a difficult time. (WSJ)

• The corporate raider Samuel Belzberg has died at 89. (NYT)

• The South China Morning Post has long been Hong Kong’s English-language paper of record. Alibaba has made it part of Beijing’s efforts to project soft power abroad. (NYT)

• The accrediting council at center of a for-profit college fraud scandal is looking for a comeback. (NYT)

• Coffee sellers are trying to fight a California judge’s ruling that would require the beverage to carry cancer warning labels. (NYT)

• Is the storied guitar maker Gibson headed for a bankruptcy filing? (NYT)

• The new chairman of the Motion Picture Association of America is a Hollywood insider and Washington influencer. (NYT)

• Companies are loading up on debt in what could be another area of concern for financial markets. (WSJ)

• Some arbitrage funds are struggling to benefit from a boom in mergers. (WSJ)