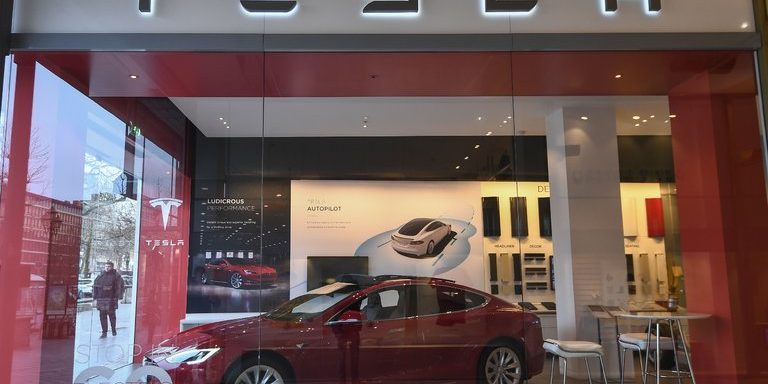 Supported by DealBook Briefing: Are FANGs Losing Their Bite?

Good Thursday morning. Another FANG stock took a tumble and the Trump administration wants to further thwart sensitive Chinese investments. This newsletter will be taking a break for Good Friday. We’ll be back with you on Monday. Some links require subscriptions.

Are we witnessing the end of a tech boom?

Investors, always willing to believe in technology companies, spent the last three years piling into their shares with abandon. Now the intellectual underpinnings of that rally are being tested.

Exhibit A: Facebook, down 20 percent from its recent high.

Exhibit B: Nvidia, off 12 percent from its recent high.

Exhibit C: Tesla, not a tech stock but in the FANG+ index.

Concerns about Tesla’s ability to fund itself can also be seen in the trading of its debt.

Tesla can’t simply cut spending to solve its cash challenge if it hopes to ramp up production. The company has racked up about $10 billion in long-term debt and has $23 billion in total liabilities. To survive long term, Tesla needs to stop overpromising and to scale back its ambitions to goals it actually can achieve. Right now, though, it just needs more money.

After the Uber incident in Arizona, those companies may take a more realistic look at what they have to spend to create a technology that is efficient and safe, and conclude that they have to pull out of the race or pare back. Users of social media and regulators may prevent social media companies from sharing so much of their data with advertisers, and that could restrain revenue growth.

And if the passion for two or three big tech companies wanes, the cooling may spread.

Today’s DealBook Briefing was written by Andrew Ross Sorkin in New York, and Chad Bray and Amie Tsang in London.

“Trump’s wealthy friends tell him Amazon is destroying their businesses. His real estate buddies tell him — and he agrees — that Amazon is killing shopping malls and brick-and-mortar retailers.”

Amazon shares recovered after a White House official told Reuters that the company faced no particular policy changes. But the administration is always looking at its options, the official added.

Should shareholders worry? The GBH Insights analyst Daniel Ives told Bloomberg that this regulatory threat was unlikely to change Amazon’s business model, but it was still “the last thing nervous tech investors wanted to see today.”

Retailers, at least, already have some reason to be cheerful.

And Amazon has another target market for expansion: housekeeping.

But the group’s executive, Scott McDonald, said that advertisers cared more about whether the data tech companies offered was accurate than whether they should have collected it.

Facebook, for its part, promised yesterday to stop advertisers targeting ads using data from third-party brokers, and to put its user privacy settings in one place, rather than about 20. It’s also rethinking privacy safeguards for forthcoming devices, The Information says.

Tim Cook of Apple is calling for privacy regulation: “To me, it’s creepy when I look at something and all of a sudden it’s chasing me all across the web.”

• Expect more deals from SoftBank’s Vision Fund. It wants to be the biggest shareholder in 100 tech companies, then consolidate them. It’s nearing a deal for a stake in Swiss Re, too.

• The German automakers BMW and Daimler have teamed up to fight Silicon Valley. (NYT)

• A Google early-stage venture fund is leading a $6 million investment in a company building software to let cars be driven remotely (by humans). (Bloomberg)

• Boeing said it had been hit by WannaCry, the malware that struck in 70 countries last year. (NYT)

• How 5G will redraw the map of the wireless industry. (WSJ)

The limits of emergency powers against Chinese money

While finalizing its plans for trade restrictions, the Trump administration is moving ahead with a more targeted strike against Chinese investment in sensitive American technology.

But the Treasury Department faces a challenge if, as planned, it uses the 1977 International Emergency Economic Powers Act.

“Just defining what percentage of equity would classify a firm as ‘state-owned’ is difficult, as is the definition of which technologies should be off limits,” the WSJ’s Bob Davis writes. “In some cases, U.S. firms could rely on Chinese ones for innovation, especially in manufacturing.”

• Republicans’ plan for a second tax cut before the midterm elections has yet to attract much financial support from business. (WaPo)

• Treasury bonds remain attractive to investors, but Moody’s argues that the U.S. may have less flexibility for future borrowing. (WSJ)

• An infrastructure bill passed before the midterms? Trump administration officials are trying to lower expectations. (WSJ)

Executives at the bank knew about his behavior, former employees said, but no action was taken until the NYT raised the issue this week.

Mr. Greenberg ended up running the wealth-management division, which accounts for nearly half Morgan Stanley’s revenue and is seen as its prime source of future profits.

With an aging and declining population in Japan, companies have to look elsewhere to grow. Takeda Pharmaceuticals’ potential bid for Shire could be one of the largest acquisitions ever of a Western company by a Japanese buyer.

Critics’ corner: It’s not really about cost savings, argues Bloomberg Gadfly’s Chris Hughes: “In reality, the attraction is that Shire is cheap and vulnerable — something other bidders will see.” And the FT’s Lex would welcome that: “There are better potential matches.”

AT&T-Time Warner trial update: The head of Turner broadcasting said that his company’s channels would not be used as a weapon against rivals if the deal went through. The judge overseeing the case told the parties to speed up their presentation. And if the deal isn’t completed by Apr. 22, it may cost AT&T up to $1.1 billion in special redemptions.

• Concho Resources will buy RSP Permian for $9.5 billion, creating a shale-oil colossus and adding to the rush to produce more oil. (NYT)

• Renault and Nissan are in talks to merge, unnamed sources said. (Bloomberg)

• Vivendi and Elliott Management are tussling over Telecom Italia. (FT)

• Stella McCartney has agreed to buy Kering out of her fashion brand, regaining full control. (NYT)

• The defense contractor CACI International has withdraw its bid for CSRA, which offers information technology services to government agencies and now looks likely to be acquired by General Dynamics. (WaPo)

• The technology company DocuSign, not yet profitable, has filed for an I.P.O. (WSJ)

• Anbang, the insurer seized by the Chinese government, is continuing to offer the small-investor products that fueled its growth. (NYT)

• The economics of home buying are getting interesting, with higher mortgage rates, tax changes and a supply-demand imbalance. (NYT)

• Wells Fargo is taking a measured approach to the gun debate, its chief executive, Tim Sloan, said — but does not believe a bank can be an “arbiter of what an American can buy.” (Charlotte Observer)

• Bumble is suing Match Group, which owns Tinder, accusing it of stealing trade secrets and interfering in Bumble’s business. (Recode)

• The Wing, a members’ club for women, is being investigated by New York authorities for discrimination. (NYT)

• The C.F.T.C. chairman, J. Christopher Giancarlo, has become a Twitter star — complete with a nickname, “Cryptodad” — over his digital currency views. (Bloomberg)

• Investors who lost money on the blood-testing firm Theranos may end up fighting the S.E.C. over its assets. (Bloomberg)