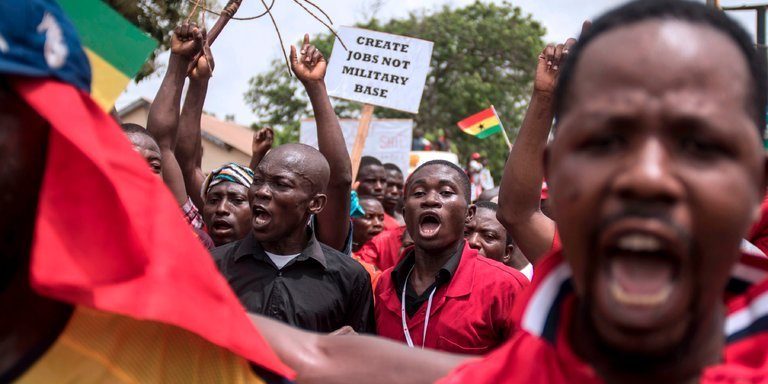 DAKAR, Senegal — Thousands of Ghanaians rallied in the streets of their capital on Wednesday to protest a deal that would give the United States military an expanded role in Ghana.

As part of the agreement struck last week, the United States would invest about $20 million in equipment and training for the Ghanaian military, carrying out joint exercises with Ghana and using the nation’s radio channels and runways.

Ghanaian officials said the agreement was an extension of a two-decades-long relationship between the United States and Ghana, a West African nation that has been a regular host of bilateral and multilateral military exercises.

“It’s the same arrangement we’ve had in times past,” said Kojo Oppong Nkrumah, the deputy minister of information. He said that resistance to the deal was largely driven by the political motivations of opposition lawmakers.

But the deal struck a nerve in Ghana, which is in a region where the expansion of the American military has received increasing scrutiny. In Accra, the capital, more than 3,000 people gathered in the streets to protest the agreement.

“Having partaken in the struggle and fight towards our independence, we can never sit unconcerned when it comes to an agreement which has the tendency of compromising our sovereignty and integrity,” said Frank Amoako Hene, president of the National Union of Ghana Students, who was among the protesters.

In North Africa, the United States military last weekend carried out its first drone strike against Al Qaeda militants in southern Libya, signaling a possibly significant expansion of the American counterterrorism campaign there. Elsewhere in Africa, the United States is investing more than $100 million to build a drone base in Niger, and the military already has a permanent drone base in Djibouti.

Four American soldiers, four Nigerien soldiers and an interpreter were killed last year by Islamist militants in Niger, an episode that set off a political storm in Washington because key lawmakers said they knew little about the military presence in Niger.

America’s relationship with Africa has been on rocky terms in recent months. In June, President Trump was reported to have said that Nigerians in the United States would never “go back to their huts” in Africa. Then last fall, Chad, a longtime ally in America’s war against Islamist extremism, was added to Mr. Trump’s travel ban, baffling the government there.

This year, Mr. Trump was said to have referred to some nations in Africa in an insulting manner. The remarks prompted outrage across the continent. President Nana Akufo-Addo of Ghana reacted strongly to the disparaging remarks, saying at the time, on Twitter, that Ghana “will not accept such insults, even from a leader of a friendly country, no matter how powerful.”

A trip to several African nations to make amends by Rex W. Tillerson, then the secretary of state, was cut short, and Mr. Tillerson was fired on his way home.

On Wednesday, some of the protesters spoke about Mr. Trump in their outrage at the military deal.

“We are saying that President Akufo-Addo should listen to the people of this country,” said Samuel Okudzeto Ablakwa, a member of Parliament who took part in the demonstrations. “He is not co-president with President Trump of the U.S.A. He is the president of Ghana.”

He and other opposition lawmakers had boycotted the parliamentary vote on the deal, saying in a statement that it was a “betrayal of the Ghanaian people by surrendering our sovereignty and threatening the peace and stability of Ghana.”

This week, Koku Anyidoho, the deputy general secretary of the opposition party, the National Democratic Congress, was charged with treason for suggesting that the protests could be the start of a process that culminates in civil revolt and the ouster of the president.

Officials in the American Embassy in Accra, played down the terms of the agreement, saying it would include no more than a small storage structure and several shipping containers, and the site would be used as a staging area for military exercises and storage.

They emphasized that there were no plans to create a base in Ghana or to permanently station American troops in the country, one of the continent’s most stable democracies.

But details of the agreement, circulated in Ghana, include giving Americans access to Ghanaian radio frequencies and an airport runway among other things. Ghanaian officials said those aspects had been in place during previous joint military exercises.

Other details of the agreement, like immunity for American soldiers on Ghanaian soil and tax exemptions for the import of military equipment, are reciprocal and can be requested by the Ghanaian military when its troops travel to the United States for training, American officials said. They noted that American soldiers were not exempt from military disciplinary procedures.

The agreement “does not give the United States carte blanche to come in and act unrestricted in Ghana,” said a lengthy statement from the American Embassy in Accra, adding that Ghana is “recognized as a global leader — capable of maintaining its own security and perpetuating peace and security in the region and around the world.”