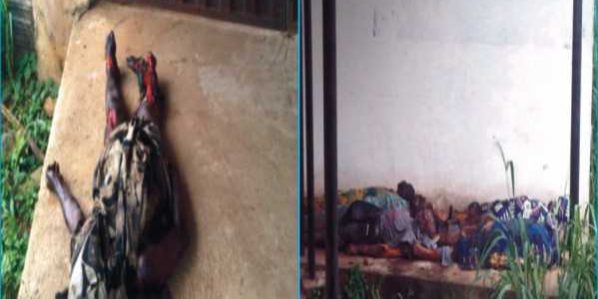 If extra measures are not taken to arrest the deplorable situation at the Imo State Specialist Hospital Umuguma, New Owerri in Owerri West LGA, patients, and staff of the state-owned hospital would be risking epidemic owing to foul stench oozing out from decomposing bodies littered within the hospital complex.

Apart from those within the hospital complex, residents of neighbouring Federal Housing Estate, Umuguma, are also at risk over the bizarre state of the hospital mortuary which has not only been taken over by decomposing corpses but also overfilled with unkempt fresh dead bodies.

The hospital mortuary located near the building complex shares borders with adjoining houses within the Umuguma Federal Housing Estate road.

Checks by Weekend Trumpeta at the Specialist Hospital Complex revealed that the mortuary seems to have been abandoned as the attendant was found missing at his duty post.

Our reporter who was at the Specialist Hospital for undisclosed private functions was attracted by offensive odour in the Complex. The stench forced him to enter the road leading to the morgue where he discovered several corpses littered around.

Unable to contain the ugly sight facing him, the news hunter tried to change position but was also faced with another heap of decomposing bodies. While attempting to get close to the block housing the mortuary, there was another bunch of dead bodies littered around. The reporter could not face the sight of looking inside or having access to the mortuary as the offensive odour was unbearable. Determined to unravel the cause(s) of the sad situation, Trumpeta went further to notice that the mortuary was under lock and key without any trace of attendant while dead bodies were also heaped around.

Incidentally, our reporter who was disturbed by the scene, ran into a bereaved family led by Hon Jude Ugwuegwulem from Owerri West, who came to check one of the deceased family members kept at the mortuary. Oblivious of the ugly development, Hon Ugwuegwulem who could not withstand the offensive and bizarre sight also observed the sickening development.

While lamenting the sad development, Ugwuegwulem told Trumpeta that he has been waiting for over two hours without any mortuary attendant showing up within that period.

However, while the discussion lasted, one man showed up claiming to be the attendant. When asked why the mortuary was locked and corpses littered around the premises, the attendant simply identified as Emeka, disclosed that “the attitude of the workers has to change when there are no incentives and motivational tools to undertake such functions”. For fear of victimization or losing his job, the said Emeka could not come forth in his disclosure of the reason behind the sad scenario.

On his own part, the Medical Director of the Imo State Specialist Hospital, Dr Andy Ezimefula, who was not in office when Trumpeta called reacted angrily on phone. Apart from pouring invectives on Trumpeta with unprintable statements when presented with the development, Dr Ezimefula alleged that the exposure is an attempt to blackmail him.

Adding his voice, Hon Ugwuegbulem however requested the state government to declare the mortuary area of the Specialist Hospital, a disaster zone and take drastic action to salvage the situation before it degenerates to a worrisome dimension.