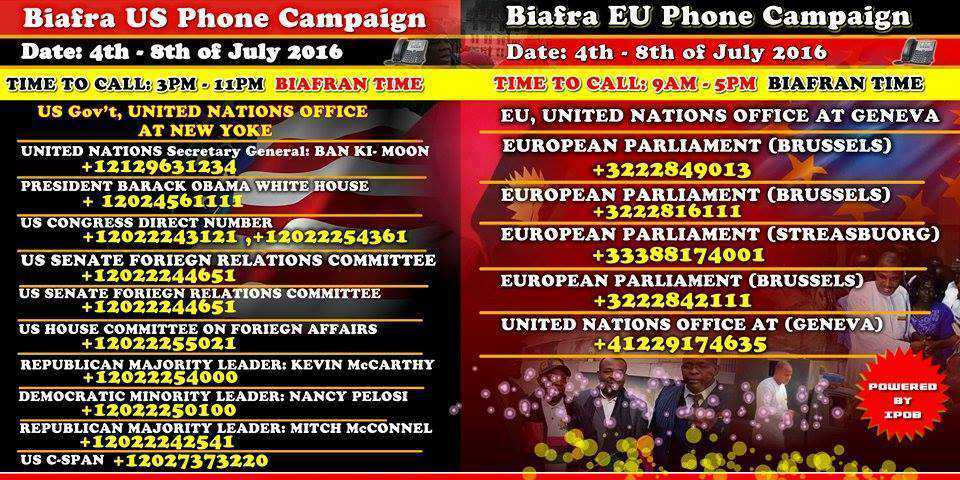 This Monday, July 4th to Friday, July 8, Biafrans and friends all over the world will commence another round of phone campaign to officials of United States of America (USA); European Union (EU) and United Nation (UN).
As the forceful disappearance and outright execution of Biafrans are ongoing in Biafra land, the Nigerian army under the order of Buhari has continued to arrest IPOB members of which IPOB national coordinator is the latest evidence of the clampdown. This has rendered hundreds of children fatherless and women widows; the onslaught aimed at the people of Biafra for peacefully aspiring for self-determination which is a sacred right is showing no sign of dropping.
In Anambra state the renewed massacred since Biafra Remembrance Day has continued unabated, while the burial of the massacred victims are taking place, the clamor for the body of the victims Nigerian army carted away with still fresh. Buhari has yet sustained the onslaught and has shown determination never to cease.
There is indication of a possible invasion of Biafra as top ranking Military personnel from Biafra land are being retired or either fired from Nigerian military force. This has mounted significant pressure in Biafra land as Biafrans continue to live in fear. The peaceful agitation for the release of the leader of Indigenous people of Biafra and restoration of Biafra has been seen as weakness. the military action against unarmed and defenseless Biafrans is a thing of great concern.
Biafrans have become a species of terror, Biafrans are endangered to the point their human right has be taken away from them and right to exist denied on different occasions. There is a premeditated plan to exterminate the people of Biafra and it is gradually being executed. The decision of the leader of Indigenous People of Biafra to go about self-determination peacefully and within the confines of the law has only given Buhari the reason to freely go about the extermination without resistance because Nigeria is a lawless country.
Biafrans shall continue to call and disturb the relevant authorities with the clear awareness that human right or life is protected without boundary. We have no arms to defend ourselves, we bear no stick or pebbles, and we shall continue to call the world leaders and institutions of the world to come to the aid of a free people even though it takes hundreds of years, we shall keep disturbing and calling till action is taken for Biafra to exit and end her political slavery. The world is a democratic world and a free world, nobody or country should forcefully hold a people against their wishes.
This current situation in Biafra land is to form part of the message in the phone campaign to the US, EU and UN officials. Biafrans and friends of Biafra all over the world are expected to be part of this campaign. Everyone is to call and declare to them the plight of Biafrans and why they should help to save the souls of Biafrans (SOS).
The numbers to call are Us Congress direct number +1 202_224_3121 & +1 202_225_4316
United Nations Office at Geneva +4122_917_4635 Time to call is (3pm to 11pm Biafran Time)
Biafra is going places and there is nothing the enemies can do about it. Use the following prompts when you call: “Hello, my name is (——–); I’m calling to appeal to the President (or the relevant government official) to:
1. This is the 10th month Mazi Nnamdi Kanu has illegally been in detention, a leader that built a radio station instead of an army, fought for self determination with words of truth instead of guns and bombs. Ask them to help in working to free the leader of Indigenous People of Biafra (IPOB), Nnamdi Kanu – the prisoner of conscience. Tell them how he was illegally abducted for exercising his right under United Nations rights of Indigenous peoples and self-determination.
2. Investigate the continued arrest, execution and most recent killing of peaceful and none violent Biafrans at their last Biafra Fallen Heroes Remembrance Day Rally by Nigeria Police and military; and to punish those found to have played a part in committing the atrocious act.
3. Plead with them to force Nigeria forces of occupation – the military and Police – as well as to stop the Buhari led Nigerian government to stop the murder of Biafrans.
4. Tell them how Biafrans are made to suffer in their land by the evil Nigerian state; and that Biafrans are looking up to them, to use their good offices in helping for the restoration and independence of Biafra.
(Thank you!) Support the restoration and independence of Biafra. (Thank you!)
US Gov’t, United Nations Office at New York. Time to Call (3 pm to 11 pm Biafra Time)
United Nations Secretary General: Ban Ki-moon
+1 212 963 1234
President Barack Obama, White House
+1 202 456 1111
US Congress Direct Number
+1 202-224-3121 & +1 202 225 4361
US Senate Foreign Relations Committee
+1 202 224 4651
US House Committee on Foreign Affairs
+1 202 225-5021
Republican Majority Leader: Kevin McCarthy
+1 202-225-4000
Democratic Minority Leader: Nancy Pelosi
+1 202 225-0100
Republican Majority Leader: Mitch McConnell
+1 (202) 224 2541
US C-span
+1202 737 3220
EU, United Nations Office at Geneva. Time to Call (9 am to 5 pm Biafra Time)
European Parliament (Brussels)
+32 2 28 49013
European Parliament (Brussels)
+32 2281 6111
European Parliament (Strasbourg)
+333 8817 4001
European Parliament (Brussels)
+322 28 42111
United Nations Office At Geneva
+4122 917 4635
United Nations Office At Geneva
+4122 917 1140
United Nations Office At Geneva
+4122 917 2127