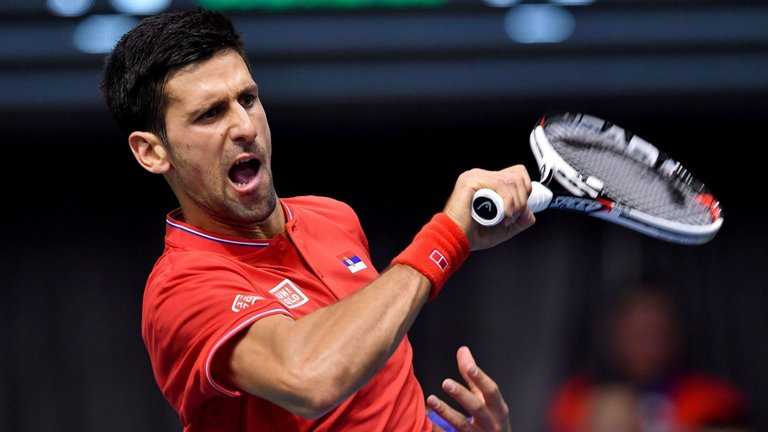 Novak Djokovic battled through the pain barrier, and survived an early scare, as Serbia opened up a 2-0 lead on the first day of their Davis Cup World Group tie against Russia.

Djokovic, who needed treatment on a sore right shoulder, dropped the opening set and then found himself trailing 0-3 in the second to 20-year-old Daniil Medvedev.

However, the world No 2 recovered to lead 3-6 6-4 6-1 before Medvedev retired with cramps after dropping the opening game of the fourth set.

The 29-year-old said: “The pain I had prevented me from playing the points as I wanted to. But it’s a good victory and we are in a very good position.”

Earlier, Viktor Troicki had given Serbia a winning start after surviving a five-set marathon which lasted four hours and 30 minutes.

Defending Davis Cup champions Argentina could be eliminated at the first hurdle, after falling 2-0 behind to Italy in Buenos Aires.

The United States opened up a 2-0 lead over Switzerland in Birmingham, Alabama.

With neither Roger Federer nor Stan Wawrinka in their line-up, the Swiss were no match for Jack Sock and John Isner who beat Marco Chiudinelli and Henri Laaksonen respectively.

In Frankfurt, hosts Germany are tied 1-1 with Belgium for whom Steve Darcis recovered from two sets to one down, to beat Philipp Kohlschreiber in the opening rubber.

In a topsy-turvy contest, the German also led 4-1 in the decider while Darcis missed the chance to serve out at 5-4 before edging through in a close tie-break.

However, Alexander Zverev levelled the tie with a straight sets success over Arthur de Greef.

Elsewhere, Croatia and Spain shared the opening singles in Osijek. The decisive moments on day one featured the rubber between Franko Skugor and Pablo Carreno Busta.

Meanwhile, two nations have already booked their spot in the quarter-finals of the competition.

In Melbourne, Australia have taken an unassailable 3-0 lead over the Czech Republic who are yet to win a single set at Kooyong.

And France also swept through the first nine sets in Tokyo, to open a 3-0 advantage over Japan who were missing their world No 5 Kei Nishikori.