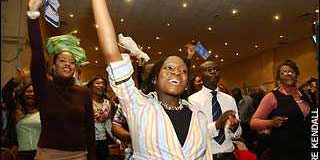 The sprawling criminal religious empires of frontline Yoruba Pastor David Oyedepo has been dealt a blow with the closure of the Cameroonian branches of his church.

Winners Chapel was ordered shut by President Paul Biya after a 9-year-old girl collapsed and died during a prayer session in Winners Chapel Bamenda. An angry Biya has ordered ALL Pentecostal churches in Cameroon shut, accusing them of being fake Christians. Already, 50 have been shut and about a hunred are targeted, according to CNN. Below is the full story, as related by CNN in a story entitled “Cameroon’s president orders Pentecostal churches closed”:

But Pentecostal pastors said the move is evidence of Biya’s insecurity about the churches’ criticism of the government.

Biya is using the military to permanently shut down all Pentecostal church denominations in the nation’s capital, Yaounde, and the North West Regional capital, Bamenda, which have the largest Christian populations in Cameroon.

More than 50 churches have now been closed, with the government targeting nearly 100 in eight other regions.

“We will get rid of all the so-called Christian Pentecostal pastors who misuse the name of Jesus Christ to fake miracles and kill citizens in their churches. They have outstretched their liberty,” Mbu Anthony Lang, a government official in Bamenda, told CNN Wednesday.

Nearly 500 Pentecostal churches operate in Cameroon, but fewer than 50 are legal, he added.

On Sunday, a 9-year-old Christian girl collapsed and died during a prayer session in Winners’ Chapel, a Pentecostal church in Bamenda. The girl’s mother, Mih Theresa, told CNN Wednesday that the pastor intended to cast out the numerous demons that were in control of her daughter’s life.

“I want the government to stop these pastors who use mysterious powers to pull Christians and kill then for more powers. All my children have ran away from the Catholic Church in search for miracles, signs and wonders,” she told CNN while holding back tears.

Another Christian, Mveng Thomas, said his marriage ended abruptly when a Pentecostal pastor ordered his wife to dissolve their union. He said the pastor described him as “an unrepentant devil.”

Pastors marched against the government’s decision Wednesday in Bamenda and Douala. Pastors said the Biya government sees the mass proliferation of churches as a threat.

Boniface Tum, a bishop of the Christian Church of God in Yaounde, said that Biya, who has been president since 1982, is becoming insecure about the freedom of speech within these churches.

“Authorizing only the Catholic, Presbyterian, Baptist, Muslim, and a few other churches, is a strict violation of the right to religion,” Tum added.

Targeted Pentecostal Christians in Bamenda are transforming their private homes into churches.

North West Regional governor Adolphe Lele L’Afrique said Wednesday that police had discovered the abduction of 30 children under age 18 by a pastor in Bamenda. The pastor said he wanted to remove the children from a bad society, Lele added.

Government officials also say that some pastors convince congregants that they do not need professional medical treatment for their ailments.

“How can a pastor say the sick needs no medical doctor? We need sanity in our Christian lives,” Nyang Blaise, a youth leader for Biya’s ruling party, CPDM, told CNN.

One woman said her mother was refusing cancer treatments because of her pastor.

“My mother’s condition is worsening after doctors confirmed she had cancer. She is dying silently, and yet we cannot persuade her to see a doctor for proper treatment, against her pastor”s wish,” Deborah Tanyi said.