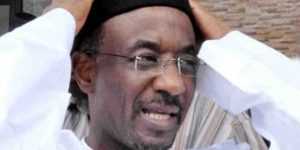 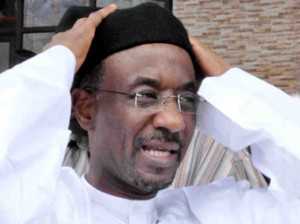 The suspended Governor of the Central Bank of Nigeria, CBN, Mallam Sanusi Lamido Sanusi yesterday lost his bid to

return to office in his suit challenging his suspension from office.

The Federal High Court, Abuja in a judgment dismissed the case for want of subject-matter jurisdiction.

Justice Gabriel Kolawole though agreed with the Federal Government that the issues raised in Sanusi’s suit were matter for the National Industrial Court, he however disagreed that the suit disclosed no reasonable cause of action.

The judge consequently transferred the case file to the National Industrial Court for determination of the issues raised in the suit.

The Federal Government had removed Sanusi from office while on an official assignment abroad.

Government had cited financial recklessness as one of the fundamental reasons for suspending him from office.

The suspension came at a time Sanusi was critical of President Goodluck Jonathan’s administration with regards to alleged mismanagement, diversion and brazen stealing of public funds made from crude oil sale

He had given statistics of the alleged missing funds.

The ex-governor had also gone to court to challenge his suspension.

He had contended that President Jonathan lacked the powers to unilaterally remove him from office over any reason whatsoever without the consent of the National Assembly.

But the government had fought back, saying the issues raised by Sanusi in his suit fell within the jurisdiction of the National Industrial Court and not the Federal High Court

The government consequently prayed that the suit be dismissed.