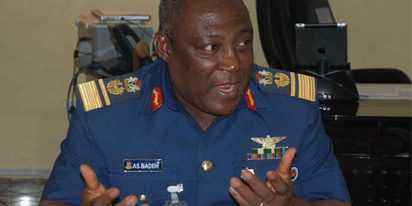 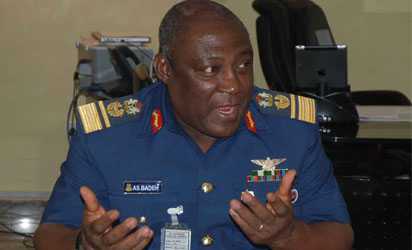 Against the backdrop of security challenges confronting the country and insinuations making the rounds of a possible coup d’ etat, the Chief of Defence Staff, Air Chief Marshal Alex Badeh, Tuesday, dismissed as untenable, such rumours, insisting that the military would do everything to defend democracy and its growth in Nigeria.
Speaking when he received the Director-General of the National Orientation Agency, Mike Omeri, in his office, Badeh said: “Rumours in some quarters of a possible coup d’état in the country are unfounded.”

Affirming the commitment of the Nigerian military to the defence of the nation’s democracy, the CDS noted that “as an arm of democracy, the military as a professional group has no option but to love Nigeria and do those things that will ensure security and protection of lives within the nation.”

Expressing further surprise at the rumours, Badeh said that democracy has come to stay in the country and the military has no intention of truncating it.

“Why should anyone be thinking in the negative fashion? Tell them we will not do it. Those spreading rumours of coups must be living elsewhere and not in Nigeria.

Commending the NOA for “living up to expectation” in its activities as typified by the Centenary Flag produced by the Agency, and the coordination of the National Information Centre (NIC), the CDS expressed support for the Agency’s programmes and policies.

These include the renaming of the War Against Indiscipline (WAI) Brigade of the Agency to Community Support Brigade (CSB) and the World Waste Bin initiative.

Mr. Omeri had disclosed the Agency’s plan to launch a security awareness campaign tagged: “Do the Right Thing: Know Your Neighbour” soon.

He explained that the campaign was, among other things, aimed at complementing efforts of the Armed Forces and also to ensure return to that age-long and celebrated value of being our brother’s keepers.

Presenting the nation’s Centenary Flag to the Defence Chief, Omeri said the flag was symbolic of the nation’s history and heritage which it seeks to pass on to future generations of Nigerians.

He expressed the gratitude of the NOA for the support and commitment of the Defence Headquarters towards the National Information Centre, noting that such was a clear statement of the Armed Forces’ dedication to the speedy resolution of the security issues confronting the nation at the moment.

Omeri further called for a day to be set aside by Nigerians to celebrate the Nigerian Armed Forces for their courage, professionalism and patriotism, pointing out that Nigerians owe the military a debt of gratitude for its selfless sacrifice for the nation.