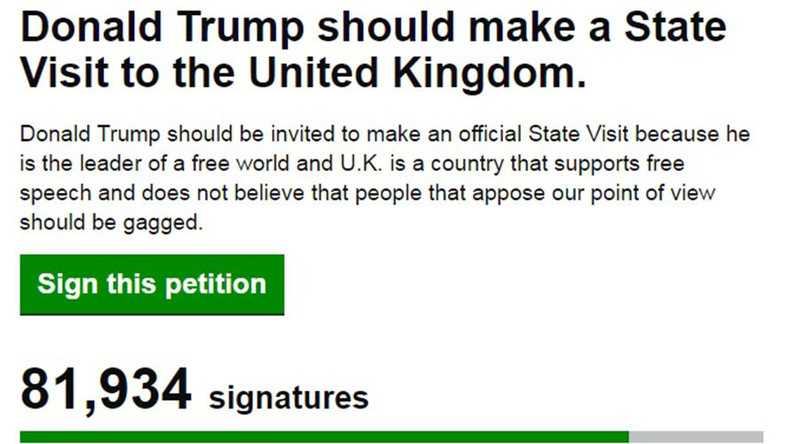 The petition, which is riddled with spelling mistakes, argues that US President Donald Trump should be allowed to make a state visit to the UK because “he is a leader of a free world.

It goes on to state that Britain is a country which does not believe people that “appose our point of view should be gagged.”

As of Tuesday morning, the petition is nearing the 100,000 signature mark required before the government will respond.

It reads: “Donald Trump should be invited to make an official State Visit because he is the leader of a free world and U.K. is a country that supports free speech and does not believe that people that appose our point of view should be gagged [sic].”

It was started by Alan Augustus Brown on Monday, as an estimated 10,000 people joined protests outside Downing Street demanding Trump’s invitation for a state visit be rescinded.

UK Prime Minister Theresa May has been criticized for failing to condemn the order and for apparently jumping at the opportunity to invite Trump to Britain when she met with the president in Washington on Saturday.

The petition calling for Trump’s state visit to be cancelled has reached more than 1.5 million signatures as of Tuesday morning.